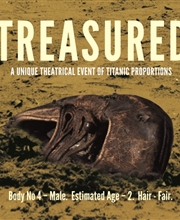 Ground breaking site-specific work Treasured will bring the Titanic to Liverpool Anglican Cathedral next week and the production has attracted widespread interest and participation, including from as far as Serbia and Macedonia. 12 talented young artists (6 from each country) will visit Liverpool to experience the event with the help of Treasured Co-Producer Aspire Trust and PASCO performing arts scheme in Obrenovac, Serbia.

Treasured, a unique, large scale multimedia theatrical event will take over this iconic city landmark, enabling audiences to take an unforgettable journey back in time into a living, breathing canvas of Titanic proportions.  Treasured, which is co produced by Cut To The Chase Productions and the Aspire Trust runs for 1 week only from 1-6 October, taking over this sacred space on a bigger scale than any previous cultural event.

Over the last 3 years, Aspire Trust has been working in the municipality of Obrenovac, part of the City region of Belgrade in Serbia, developing and co-producing the PASCO (Performing Arts Scene in Obrenovac) project together with local Obrenovac partners and partners from Buskerud, Norway (who donated the bulk of the funding for the project). Aspire’s role has been to offer training, mentoring, coaching and advice in the development of their local creative industries sector, the arts in local schools and the improvement of skills in performing, film making and project management.

PASCO has had demonstrable economic, cultural and social impact on the region and has also led to some long term constructive and creative relationships with Merseyside artists and Serbian colleagues.  When Treasured began, a programme of workshops which introduced Treasured to local young people and senior citizens, local artists and musicians was implemented. During these workshops, small performances, poetry, shadow puppetry and music were made – the result of which has led to 6 talented young artists at the start of their career visiting Liverpool to not only see the production on press night, but to produce their own performance in response to the show, visit local schools and experience the treasures that Liverpool and Wirral have to offer.  They will also be joined by 6 Macedonian young artists from the town of Stromica, renowned in the Balkans for its annual carnival.

Nick Owen of the Aspire Trust said: “I am absolutely delighted that this trip has been made possible by the generosity of the municipality of Obrenovac and town of Stromica, and the tenacity of the young people and cultural leaders of Obrenovac and Stromica.  For many of them, this is the first time not only in the UK, but the first time they have left their home countries.  Whilst the Balkans has had –and continues to play –a major impact on European history, it is amazing and hugely gratifying to see how artists and cultural connections can bind young  people and communities across the ages, developing healthier cultural links, connections and respect between communities in the country. ”

“The PASCO project as a whole has enabled its participants to travel outside Serbia for the first time in their lives: in 2010 some of the group was invited to the summer festival in Parnu, Estonia: in 2011 they went to Drammen in Norway for a similar festival, and in October 2011 saw the largest trip to Sigdal in Norway as part of an Autumn School in Performing Arts, co-produced with Aspire Trust.

“This is the first time the group have visited the UK and Liverpool  and is an important visit for them as young artists and performers; PASCO has seen them produce shows based on The Who’s Tommy, the play The Rope by Patrick Hamilton – both UK generated artistic productions.  It is now time for the group to come to the source of that work – the UK – and build on the crucial links it has with its UK partner, the Aspire Trust.”


Inspired by one of the most powerful tragedies of the last 100 years, the story of the RMS Titanic, Treasured aims to move beyond simply re-telling the tale of that fateful maiden voyage in 1912, and unravel some previously untold, more unusual strands of the story as well as expose some of the myths that surround this universal tragedy. Awe-inspiring projections, soundscapes and aerial theatre will transform the space, while an accomplished cast, live professional musicians and live recordings of brand new contemporary classical music (recorded at Liverpool Phil at the Friary) will combine to evoke the stories and after effects of this catastrophic event.

Treasured is a journey which begins in the stunning Lady Chapel of the Liverpool’s Anglican Cathedral; this remarkable and very beautiful Gothic style space will be filled with music played live by the RLPO‘s trumpet player Brendan Ball. The time is now, 2012, one hundred years since one of mankind’s greatest sailing ambitions – The Titanic – broke in two and sunk down slowly to the seabed. The audience will be invited to observe a certain gentleman at work before moving through the myriad, elaborate and awesome spaces of the second longest cathedral in the world as they move back in time through the elaborate stone corridors and up into the awesome Central Cathedral where they will encounter a series of ‘happenings’ and installations. The journey ends in the Nave of the cathedral where those experiencing Treasured will observe an astonishing discovery…

Treasured’s writer and composer is Ailis Ni Riain, who has this year been awarded the Erhardt Bursary by the Peggy Ramsey Foundation. Born in Cork, this international prize-winning classical composer and published playwright produces work which challenges, provokes and engages.

Treasured is co produced by The Aspire Trust – an arts based social enterprise dedicated to touching peoples’ life stories through creativity.

Schools: £5 (teacher free with every 10 students)