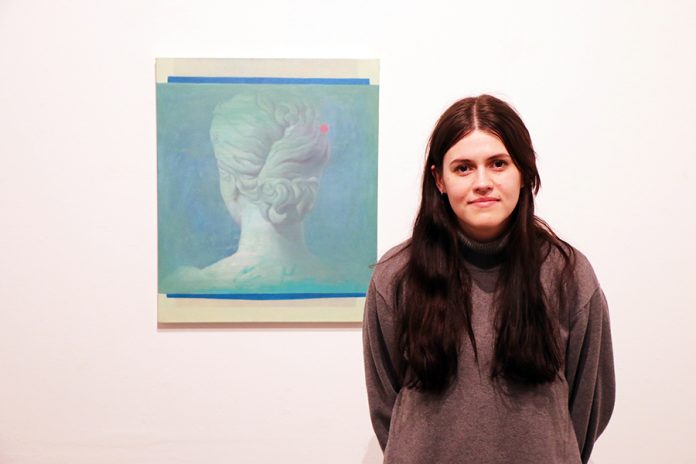 Time running out to see work of ‘one to watch’ young painter, Louise Giovanelli, shortlisted for major art prize

There are now just three weeks left to see the work of young painter Louise Giovanelli, who was recently shortlisted for a major national art prize, at Warrington Museum & Art Gallery.

The 24-year-old, who was described as ‘one to watch’ by leading online art gallery Saatchi Art, was recently announced as one of 12 artists in the running to win the 2017 Contemporary British Painting Prize.

One of the pieces she entered in the competition, Mould II, is currently on display at the Warrington gallery as part of her newest body of work, A Throw to the Side, which was inspired by the gallery’s collection.

Louise admitted she was surprised but overjoyed to discover she had been shortlisted.

“I’m just really pleased,” she said.  “All the other artists are really good; they’re all older and more experienced so I’m just grateful to have made it this far.”

A Throw to the Side is a completely new collection of haunting yet beautiful work which explores the sensorial possibilities of paint.

“I like to consider the figure and object,” she added.  “I’m really interested in art history and talking about where our visual tradition comes from.

“Over the last couple of years I’ve been visiting galleries around the world, taking snapshots of different elements of paintings, reinterpreting and reimagining them in new pieces.”

Louise has done the same with Warrington Museum & Art Gallery’s collection by creating alternative narratives to existing work; in this way painting is used as a camera, drawing attention to details that would otherwise be left overlooked or unexplored.

Her starting point was the work of John Warrington Wood, a sculptor of mythological and biblical subjects who was born in the town but later moved to Rome to work.  His statues of Raphael and Michelangelo stand at the entrance to the Walker Art Gallery in Liverpool.

Giovanelli has reflected upon and considered the artist’s work held within Warrington and the art gallery itself, as well as his wider reach and legacy and how these can be connected to her recent investigations into the relationships between painting, sculpture and architecture.

Three of Giovanelli’s paintings which were entered for the 2017 Contemporary British Painting Prize will be featured in a special exhibition in August – when the winner will be announced – at The Stables Gallery in London along with the other shortlisted artists’ work.

If she wins, Louise will be awarded a solo exhibition at The Herrick Gallery in London, a critical essay on her practice by art critic and curator Nicholas Usherwood and a £2,000 purchase prize of her winning work which will then enter The Priseman Seabrook Collection of 21st Century British Painting.

As one of the country’s most promising young painters, Louise’s work has attracted huge interest since she studied fine art at Manchester School of Art, for which she was awarded a first degree.

A Throw to the Side is her third solo exhibition, with previous displays at Grundy Art Gallery in Blackpool and Touchstones Rochdale.

She is currently working with The International 3 Gallery in Salford and her work is in high demand, with pieces having just been featured in a dual show at Liverpool’s Crown Building Studios and in a month-long residency at The Griffin Gallery in London which runs until the end of June.

Louise has already been the recipient of a number of prizes including The Leonard James Fine Art Prize, The Manchester Academy of Fine Art Award and The Ken Billany Painting Prize, and in 2015 she was awarded second place in the Saatchi Art Showdown online art competition.

Her work is held in private collections in the UK, USA, Canada, China, Germany, Slovakia and Italy.

“She has a really keen eye for subtleties and nuances which others might overlook, and the fact that the new work featured in A Throw to the Side was inspired by exhibits from our collection makes it a really unique display.

“Warrington Contemporary Arts Festival is returning this autumn and I hope Louise’s work and achievements inspire other artists to enter the Open Art competition.

“Here at Culture Warrington one of our aims is to support and provide opportunities for emerging artists within the region; Louise’s exhibition is proof of that commitment.”

Members of the public are invited to join Louise Giovanelli at a special exhibition closing event at Warrington Museum & Art Gallery on Thursday 13 July from 6-8pm.

A Song For Liverpool