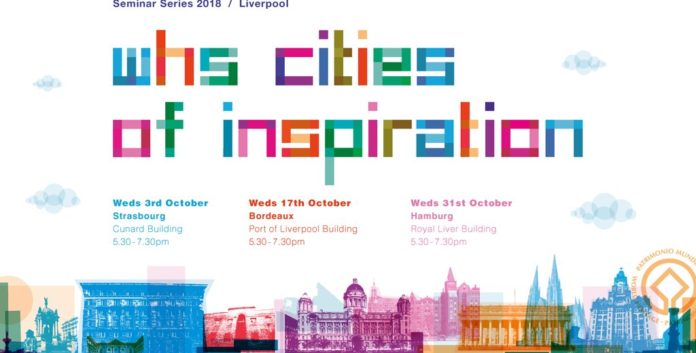 Expert speakers from Strasbourg, Hamburg and Bordeaux will reveal how cities can make the most of UNESCO World Heritage Status

Each seminar will take place in one of Liverpool’s “Three Graces”, which sit on the city’s famous, and UNESCO recognised, waterfront – Royal Liver Building, Cunard Building and Port of Liverpool Building.

With the lessened risk to Liverpool’s World Heritage Status, this year Engage Liverpool is focusing on how UNESCO status can benefit the city through development, civic design, tourism, economic and cultural regeneration and local appreciation.

The cities of Strasbourg, Hamburg and Bordeaux have been invited in recognition of their achievements in terms of utilising UNESCO status to enhance their regeneration and development, boost their tourism industry as well as adding value to their citizens experience of living and working in the city.

With the use of the Three Graces as the venues for the seminars, providing access to the buildings not usually open to city centre residents, the events are combining the celebration of Liverpool’s world famous architecture whilst encouraging engagement and debate around the future of our city.

Speakers confirmed so far include the Mayor of Strasbourg, Roland Ries and the architect Henri Bava who is leading a major development project (Deux-Rives) in the city.  Bordeaux and Hamburg will be attending with managers of their World Heritage Sites along with an architect working in each city. There will also be a local panel with guests including Councillor Hetty Wood, Councillor Alice Bennett, Mark Kitts – Assistant Director Regeneration at Liverpool City Council., and Councillor Tricia O’Brien.

Gerry Proctor, Chair of Engage Liverpool CIC said “The impact of last year’s seminar series was truly remarkable, and we were delighted to be part of the programme of work in the city that led to a favourable decision by UNESCO. We were honoured to be invited to speak directly to assembled ambassadors in Bahrain at the 2018 WHC meeting, to share the perspective of the citizens of Liverpool. The upcoming ‘Three Seminars in the Three Graces’ is a conscious follow-up, presenting an opportunity to learn and be inspired by the work of other port cities who manage their UNESCO status in a positive and beneficial manner”.

The high-quality speaker line up has been secured thanks to sponsors Liverpool City Council and RS Clare Ltd, as well as P-IE (Planit Intelligent Environments) and BCA Architects. Both P-IE and BCA will be supporting the discussions on how to design and plan in the World Heritage Site while drawing upon UNESCO guidelines and using the Historic Urban Landscape (HUL) approach.

Those wishing to register for the seminar series can do so at www.engageliverpool.com.

Building Sites to be Covered in Art in 2008

200 artists and over 250 new works for the Independents Biennial

Miffy at the Gallery