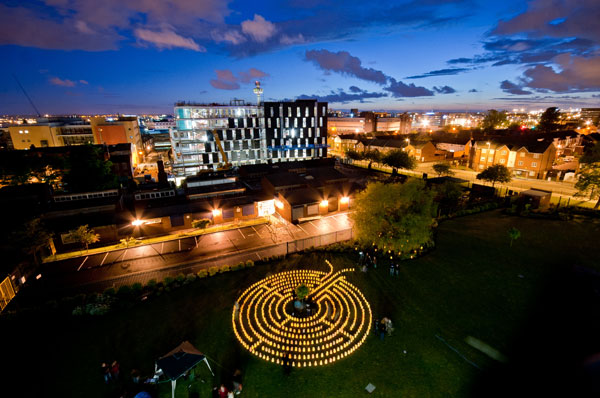 Lovely photo by Mark McNulty. We stayed in the Baltic area on Friday evening so missed a lot of stuff but also saw some good things and will post some pictures later.

Liverpool’s nocturnal celebration Light Night was again a resounding success, with thousands of switched on cultural night owls out and about enjoying the city’s annual arts and culture festival. It all took place on Friday 13th May 2011 17.00 till very late with 97 events across 50 venues, making it the largest of the UK wide Museums at Night.

Light Night de-lights included Brouhaha bringing the city centre streets alive with the launch of Liverpool’s International Carnival, the amazing a cappella singing from Sense of Sound in the jam packed Anglican Cathedral, the sell out evening tours of the historic Old Dock, the atmospheric Candle Lit Labyrinth at the Art and Design Academy created by Lecturers and Students, live music experiments from music collective a.P.A.t.T at Tate Liverpool, the launch of Look11:Liverpools 1st International Photography Festival across 12 venues including the Walker Art Gallery, the Bluecoat and the Contemporary Urban Centre.

Charlotte Corrie of Open Culture, Producers of Light Night said “We’re delighted to see everybody out enjoying Liverpool’s annual Light Night. The city’s cultural venues were buzzing; a fun night really was had by all. Light Night is for everyone and a great chance to see the city in a different light”

‘Chicken Soup and Scouse’ – The Film!

Open Call For Photos: ‘Real Love’ Bed-In at The Bluecoat