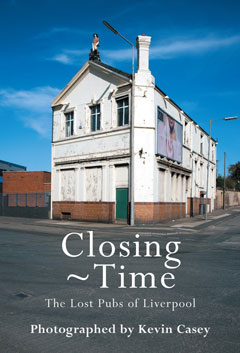 Closing Time is a book of colour photographs by Kevin Casey documenting the closed and abandoned pubs throughout Liverpool’s working-class communities.

Taken between 2007 and 2010, the images are a stark representation of the decline of ‘the local’ as patterns of life and work have changed.

Although focusing on Liverpool, Closing Time highlights a national issue. The pressures of the smoking ban, cheap supermarket alcohol, recession and the attractions of home entertainment have all taken their toll on the traditional, working-class night out. Since 2005, over 6,000 of Britain’s pubs have closed, representing a great loss socially,  architecturally and economically.

Casey’s photographs also highlight the wider issue of Britain’s urban decay that, far from being turned around by the regeneration schemes of the 1990s and 2000s, has continued apace in most parts of the UK.

The book is an arresting collection of 80 images that captures these buildings at the point just before most of them will be gone forever.

Closing Time will be launched on Wednesday 1st December 2010 at FACT, 88 Wood Street, Liverpool between 6:30pm and 9:30pm. The event will include a live webcast debate about the future of local pubs and is supported by several local breweries. Press and public are welcome to attend.