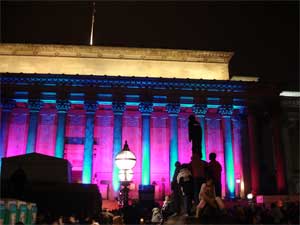 I went along to St Georges Plateau to witness the big celebrity switch on of the Liverpool Christmas lights last night. I knew I wouldn’t enjoy it but I feel duty-bound to record these momentous events, I know you all appreciate my efforts.
But I’m sad to say I gave up after half an hour so did not see the actual switch on by Sir Steve Redgrave (Olympic rower extraordinaire).
Having endured ‘Perfectly Frank’ the Sinatra tribute guy (he’s rather good but its not my kind of music)
Then two local footballers, Tim Cahill of Everton
Kev Seed (Radio City DJ): ‘So Tim, what do you think of this important issue of recycling eh?’
Tim: ‘Pardon?’
and John Arne Risse of Liverpool ‘We just want lots of 3 points for Christmas’
I lost all will to continue to stand in the freezing cold when some ‘singer’ called Tabby (x-factor finalist apparently)came on. Tabby? We had a cat called Tabby and he could sing just as well!
There was a rumour that the next treat was an ex Atomic Kitten so a hasty retreat was called for.

So I’m going to cheat and go back tonight to take some pictures of the lights, I’m sure they’ll be splendid.