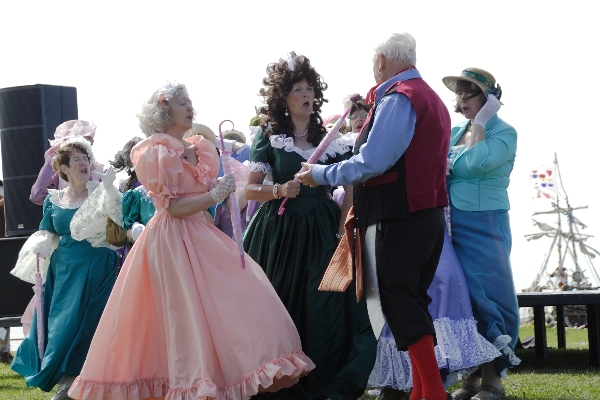 Earlier this year, when Wirral Festival of Firsts 2014 announced its full programme, organisers boasted that this year’s festival was set to be the best yet. This may have seemed a dangerous assertion back in May, but Art in Liverpool can now report that it really was: with record numbers of visitors at festival events, more funds than ever before raised for Claire House and many stand-out moments, the Festival of Firsts team can give themselves a bit of a pat on the back.

Amongst those key moments this summer were the “Festi-Velo” and Parade on Saturday 12 July. This day long celebration was led by the Off Pitch choir singing aboard an open-top bus, followed by over 50 decorated bikes, embellished rickshaws and accessorised milk floats, courtesy of Morton Dairies, Hoylake. The Festi-velo was followed by a walking parade of groups such as the Wirral Pipe Band and the Big Easy Jazz men.

The BSide the Cside show on Sunday 13 July was another memorable event. The Pagoda Chinese Youth Orchestra opened the show followed by a community sing-along version of the Pirates of Penzance, with the Grace Darling driftwood installation by Frank Lund as the back drop. Later on, John Gorman compèred an afternoon medley of musical performances with the Rock Choir closing the show.

The Festival also enjoyed an array of premieres: from the first Wirral Mass by Clare Madely and John Gorman, to the world premiere of Hyacinth Sweeney Dixon’s play Rosa starring Perri Alleyne-Hughes and the first full production of Tim, an Ordinary Boy by Steve Regan, there were certainly a few ‘firsts’. In addition, Gallery Hoylake encouraged artists to work closely with shop proprietors to develop original window displays, over 120 poems were displayed in shopfronts throughout Hoylake and West Kirby, and Art at the Parade and Art on the Promenade drew record numbers of artists wanting to display their work.

There were also some ‘Firsts’ winners this year, thanks to Wirral Festival of Firsts’ aim to inspire and encourage new work through a series of competitions. Organised in collaboration with Art in Liverpool and Art Club, Steve Deer won the Festival’s second annual online photographic competition with his photo Mr Diggles, with second and third place awarded to Patrick M Higgins and Bel Shaw, who also won the People’s Choice award. First place in the online art competition also run by the festival was earned by Amanda Oliphant, with artists Kevin Adams and Nigel Morris as the runners up.

With so much going on, it’s been a busy few months, so what’s next for Festival of Firsts? Run entirely by volunteers, the organisers are already looking for people who can offer their time and skills over the next year to plan the 2015 instalment. Festival of Firsts is a community association, holding annual public meetings to report on activities and finances and elect their executive. The next Annual General Meeting is open to anyone interested in supporting next year’s event, and it will take place at Holiday Inn Express, Hoylake on Tuesday 2 September, at 7.30pm. There are many roles and responsibilities to suit all interests and availabilities and everyone is welcome to get involved.