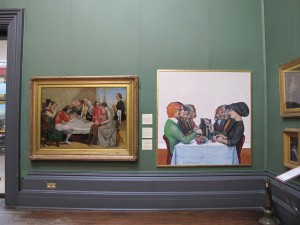 The Dinner Party, a well-known and bafflingly complex painting of 24 figures sat around a dinner table by Pop-artist Sam Walsh, has gone on display at the Walker Art Gallery.

For the first time it is shown next to its 19th century inspiration Isabella by the Pre-Raphaelite artist John Everett Millais, where visual parallels between the works can be easily identified.

Ann Bukantas, Head of Fine Art said: “This is a great opportunity to display Walsh’s popular and incredibly complicated painting next to Millais’ Isabella. It is a fascinating example of how two paintings, created more than a century apart, can still ‘speak’ to each other.”

Irish-born Walsh settled in Liverpool in 1960 and established himself at the heart of the city’s creative crowd. The Walker’s collection and Walsh’s circle of artist, poet and musician friends were an important source of inspiration and often the subjects of his work. 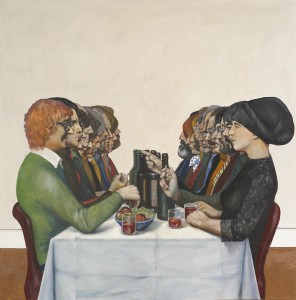 The sitters for The Dinner Party, who would never have been together at the same time, are all real people from different periods of Walsh’s life. It features famous friends such as the artists Maurice Cockrill and Adrian Henri and the poet Roger McGough, as well as Walsh’s neighbour, solicitor, ex-wife, partner and bank manager.

Walsh himself appears twice in the painting, sitting on opposite sides of the table. The Walsh on the right-hand side is shown wagging his finger at his opposing self, a mannerism he particularly disliked. This gesture is also good example of the humour often evident in Walsh’s work.

The painting has been lent to the Walker Art Gallery by John Entwistle, OBE.

Fire at the Bluecoat

The Bells, The Bells, Listen to the Bells on Monday

Where Will be next British City of Culture?

New Additions to the Artists Directory