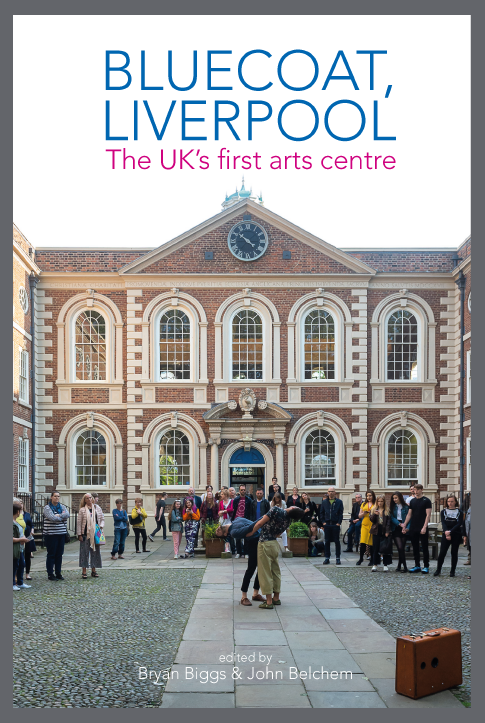 Bluecoat has been at the heart of Liverpool’s cultural life for three centuries. We’re delighted that a book telling its fascinating story is now published. Bluecoat, Liverpool: The UK’s First Arts Centre charts the building’s transition from eighteenth-century charity school to pioneering centre for the arts.

Edited by our Artistic Director Bryan Biggs and eminent Liverpool historian John Belchem, the publication includes chapters by invited writers on key strands, including visual art, music, performance, the building’s creative community, its origins as a charity school and its distinctive architecture.

The book sheds light on the port’s religious and mercantile environment, including transatlantic slavery and educational philanthropy, from which Bluecoat emerged, and how echoes of these continue to inform our work with artists. The predominant focus is on an inclusive building, where ‘village hall meets the avant-garde’. Copies of the book are available from publishers Liverpool University Press or local book shops.

Darren Henley, Arts Council England’s CEO, has written a foreword for the book, which has been endorsed by leading cultural figures associated with Bluecoat:

‘Bluecoat is one of the institutions that makes the cultural life of Liverpool so unique. A special creative atmosphere housed within a truly historical building … a place I discovered as a student and have continued to adore’. – David Olusoga

‘Bluecoat gave me, and I’m sure many other artists, a big break early in our careers – long may the arts centre reign!’ – Jeremy Deller

‘It’s fairly unusual, as an artist, to have an ongoing dialogue with an arts organisation. This speaks volumes about the ethos of Bluecoat: of “becoming family”’. – Sonia Boyce