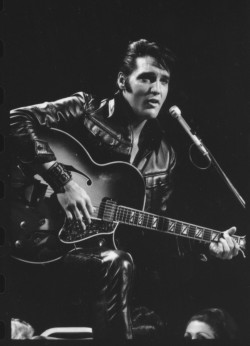 5 October 2011 until 2013 at The Beatles Story, Liverpool. ‘Elvis and Us’
Elvis Presley Enterprises, Inc. (EPE), the parent company of Graceland in Memphis, along with The Beatles Story in Liverpool, England, have announced a transatlantic partnership to develop an exclusive, jointly curated exhibition that will explore how The Fab Four were influenced by the King of Rock ‘n’ Roll.

The exhibition – entitled Elvis and Us – represents the first time the two cornerstones of 20th century popular culture have come together since that fateful meeting in 1965 at Elvis’ Bel Air home. The exhibition will include rare and exclusive artefacts from both The Beatles Story and Graceland archives, many of which have never before been exhibited publicly.

One of the key elements explored in the exhibition will be the evening Elvis and The Beatles met in person on August 27, 1965, at his home in Bel Air, California.

One of the centrepieces of the Exhibition will be the white Fender bass guitar played by Elvis and The Beatles at their meeting. A true piece of pop culture history; it has never been on public display before.

Other artefacts being brought to the UK for the first time include the Jailhouse Rock shirt worn by Elvis in the film of the same name, a 1st album acetate, telegrams from The Colonel and Elvis to Ed Sullivan, rare video footage from the earliest days of Elvis’ career, a ticket to the ‘68 Comeback special and very the pool table played on by Elvis and The Beatles.