‘Victim, no resurrection’
In memory of the Paris victims 13th November 2015.
By the artist Terry Duffy

‘Victim, no resurrection‘ once referred to as, “one of the most controversial pieces of twentieth century art” was painted in Duffy’s Liverpool studio in 1983 and has been installed in many Cathedrals including the Liverpool Anglican and other places of worship and galleries throughout the world over the past 30 years.

It questions our awareness and anxieties of present day global conflict and extremism. Never more pertinent today because of the many hundreds of victims of the massacre in Paris 13th November 2015.

‘Victim, no resurrection‘ is a powerful symbol that ‘enough is enough’ and that people in power and authority have to do more in Paris, Syria and everywhere as to the plight of victims of conflict.

It is in Coventry Cathedral to mark the 75th anniversary of the Coventry blitz as well as British and German reconciliation and collaboration. It was previously shown in Dresden because of the Allied bombing there 70 years ago.

‘Victim, no resurrection‘, isn’t the crucifixion of Christ, it is a window into the world of victims of conflict represented by man, women and child, a world of human suffering. The painting is a highly complex composition. In the lower section, there are several feet and legs, posed and contrived ignoring the pain and suffering above.

A wine glass appears to be casually left on a shiny floor. Does it symbolise the taking of Communion or is it ironically a party where people prefer to ignore the deprivation above them? Towards the centre, is the torso a man or a woman or is it both? Is the figure appearing from the torso’s breast a child or distorted tortured figure looking down at you with arms and fists striking outwards to the right, attempting to fight or escape?

At the top of the painting, a head forces upwards, as though screaming, is it trying to run away from the light behind it? Is the outstretched hand on the far left reaching for another cross, a symbol of the true crucifixion?

‘Victim, no resurrection‘ is on a journey of peace and reconciliation. A contemporary interpretation of Stations of the Cross from Liverpool where it was painted to Jerusalem many years from now.

Terry Duffy is an international artist with a reputation for unique and challenging work. He has exhibited in London, Paris, Berlin, Philadelphia, New York and the 2009 Venice Biennale. Earlier in his career he worked with Joseph Beuys and John Cage.

He has received major Arts Council awards and international media coverage including indepth coverage on BBC World News. In 1992 he was the British Council Fellow in Fine Art in Budapest.

His work is in private, public and corporate collections worldwide and has been published and shown internationally in press, television, cinema, music and book industries. He is Chair of The British Art and Design Association. 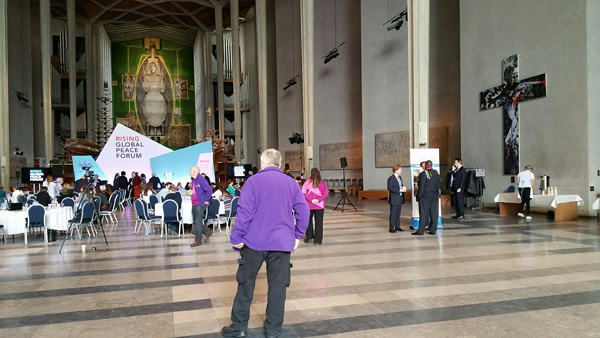 You Could Be A Part of a Tate Exhibit