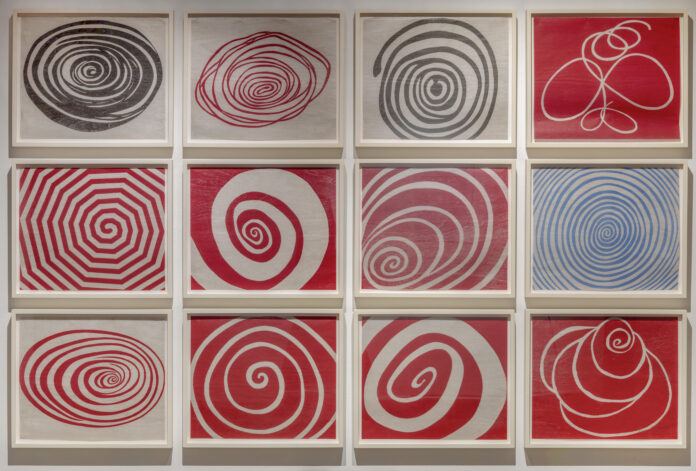 Louise Bourgeois (1911-2010) is widely recognized as one of the most important figures in modern and contemporary art. Her career spanned most of the avant-garde artistic movements of the 20th century while staying true to her own unique style which encompassed drawing, print and painting as well as sculpture. From 24 July, Tate Liverpool will present ARTIST ROOMS: Louise Bourgeois in Focus with artworks centred on Bourgeois’ core themes of sexuality, isolation, and motherhood.

Bourgeois’ work is often biographical, influenced by her troubled childhood and her own experiences as a mother. She recreated the past, reliving emotions that she experienced many years ago and weaving memories into her work as a way of maintaining balance and facing present difficulties. Her sculptures, works on paper and fabric pieces are all deeply personal, reflecting her mental state in a raw and immediate way that remains relevant to those who encounter her works today.

Her relationship with her mother was an incredibly significant influence on Bourgeois, and the struggle between mother and child is central to many pieces. The spider is a well-known representation used by Bourgeois, it symbolises both the protector and the predator and is an ode to her mother. The display will include one of her best known works from this series, Spider I, as well as Ode à Ma Mère (both 1995), accompanied by other works centring on the complexity of motherhood which similarly reflect a sense of fear and uncertainty. Bourgeois addressed maternity in all its stages; from fertility and pregnancy, to feeding and protecting, but also anxiety and loss. Representations of these themes can be seen in red gouaches such as The Feeding 2007, The Family 2008, and Couple 2009. The colour red recurs throughout Bourgeois’ work, where she would use it to refer to the extremes of human emotion.

The works that have been brought together as part of the ARTIST ROOMS display show how Bourgeois worked in both modern and traditional techniques, using diverse materials such as bronze, marble and fabric. The soft textile sculptures, are made using textiles and old clothing that she had kept for years from the family tapestry business – stitching, weaving and repairing damage reflect Bourgeois’ memories of working alongside her mother. ‘Cell’ structures are one of the artist’s most famous series and Cell XIV (Portrait) 2000 is a powerful work that consists of a cage-like structure containing a red fabric sculpture of three faces that are stitched together. Due to the title the work can be interpreted in different ways but fear and pain – physical, emotional and psychological – are represented in these cells and are a hallmark of Bourgeois’ work across her career.