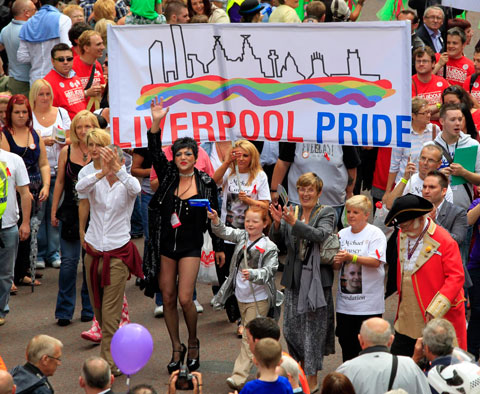 Applications are now open for the Liverpool Pride March, which will journey through the city centre as part of Liverpool’s second ever official celebration of all things LGBT, to be held on Sat 6th August 2011.

This year’s Liverpool Pride March has been organised in association with Merseytravel.

The undoubted highlight of the festival, the Pride March gives the LGBT community, their friends and their families the chance to parade through Liverpool’s streets in a blaze of colour, music and, this year, hippies, whilst raising awareness of homophobia in the local area.

The march is planned to start at St Georges Plateau, Lime St, from 12pm (participants are asked to gather from 11am) and take in Lime St, Queen Square Bus Station, Whitechapel, Lord Street and North John Street before turning down James Street, crossing The Strand over Mann Island and ending in front of the main stage at the Pier Head. The arrival of the march at Dale Street will see the start of the Liverpool Pride music festival, which will include a wealth of yet to be announced local, regional and national talent.

Last year, over 3,000 people took part in the Liverpool Pride march including gay bars, shops, restaurants, organisations and support groups in addition to many individuals and their nearest and dearest.  Organisers are expecting an even larger crowd to take part this year and so are advising anyone who wants to take part to apply early.

For 2011, the Liverpool Pride march will be celebrating the Summer of Love theme that was adopted earlier in the year by members of the LGBT community. So start thinking about your costumes and entries now! Those wishing to take part are encouraged to dress up, think outside the box and be as creative as possible bearing in mind the diversity of the Summer of Love theme. Come dressed in a Summer of Love style that suits you, remember we’ve had over 40 summers since the 60’s ended, which was your Summer of Love?

Think about the fashion, music, film, celebrities, television shows and events which took place during your Summer of Love, there is a wealth of ideas to choose from, and a number of different ways in which to celebrate this fantastic theme!

Similarly to the Liverpool Pride March 2010, there will be no motorised floats included, in order to place more emphasis on the issues of Homophobia in the Liverpool LGBT community and also to keep the festival’s carbon emissions to a minimum.

The march is completely free to join and Individuals, groups and organisations are invited to take part by registering online at www.liverpoolpride.co.uk/march, or you can turn up on the day.

Liverpool Pride is also seeking volunteers to take part both in the run up to and on the day of the festival. If you have a skill that you’d like to contribute toward the festival or if you want to come along and take part in any capacity that you can, then we’d be delighted to hear from you! We’re looking for anyone and everyone to take part, from bloggers and events workers to stewards for the March and stages. Click on to www.liverpoolpride.co.uk/volunteer for more information.

Before 2010, Liverpool was the largest city in the country that didn’t have its own official pride festival.  Liverpool Pride came about following the launch of the LGB&T Network in 2009, at which the public voted for a pride festival to engage, empower and involve the LGB&T communities within the city. This was fully endorsed by Liverpool City Council and the first official Liverpool Pride Festival saw over 21,000 people take to the streets of Liverpool in celebration of all things LGBT.  It is hoped that Liverpool Pride 2011, with its Stanley Street and Eberle Street fringe events, will build on this success and will celebrate the diverse community of one of Europe’s leading cultural cities once more.

Make sure you check out liverpoolpride.co.uk to have your say and for all of the latest pride news.

On Adam Nankervis by Alex Hetherington