Stuart Ian Burns Biennial review Part 1. What is definitely new is that this definite structure has lent a coherence to proceedings so that everything feels unified and properly curated rather the individual venues doing their own thing under the Biennial banner.

Here then is the biannual Liverpool Biennial review. The theme for 2008’s International show is Made-Up which of course has the double meaning – the scouse term for being happy and the actual process of creating a piece of art. Artistic Director Lewis Biggs says it’s also “a celebration of the ways in which artists use imagination” and that he wanting to bring work which doesn’t just “traffic in information” but allows the artists to show their deep seated passion for what they do, and create something “totally new”. What is definitely new is that this definite structure has lent a coherence to proceedings so that everything feels unified and properly curated rather the individual venues doing their own thing under the Biennial banner. 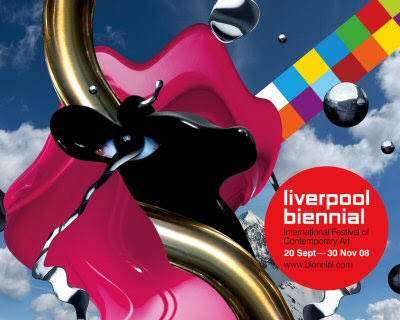 So unlike previous years were the work has spread across the city and even with the help of leaflets it was difficult to get a fix on everything, this year a proper guide book come catalogue has been produced with an excellent clear map in the back and all of the different venues and public pieces placed on a trail, marked in pink and clearly signposted in the real world. I walked the trail today and it was a breeze if a bit of a slog by foot, the only times when I got lost having more to do with my lack of sense of direction than deficiencies in the map.

Unifying all of the venues in the one guide too means that even in the unofficial venues, information about the work is close at hand, the page on the right offering an excellent reproduction of each piece, and on the left a carefully judged explanation. Plus it’s small enough to fit in the span of the hand and tactile enough to be flicked through. I quite enjoyed walking into each venue, guide in hand, the art lover’s equivalent of a sword and shield, ready to do battle with whatever conceptualism the artist wanted to throw at me.

A new visitor centre has been installed at the old ABC cinema on Lime Street and though the Annette Messager piece in the old screen two (or is it three?) is interesting (a meditation on time and cinema with ghostly cloth flowing across seats and a sinister skeleton). There’s a shop for refreshments and merchandise. Putting the Biennial’s embassy in such a central position is a great choice, somehow giving it a prominence lacking in previous years. It’s also an excellent chance to enter the building for the first time since it closed ten years ago (has it really been that long?) and tut at the state its in.

Memories of seeing It’s A Wonderful Life for the first time on the big screen and not wanting to see it on the small screen ever. Going on an almost date (neither of us seemed sure if it was one) to see Smilla’s Feeling For Snow with a girl called Theresa who was on crutches after she’d fallen off a bollard one night when I was walking her home from night class. Spending most of The Lost World: Jurassic Park with a small child kicking me in the back trying to hear the thing over the din of the family sitting in front of me making sure they were all getting the same share of popcorn. Good times.

The Atkinson: Big Open Weekend – Be Part of it