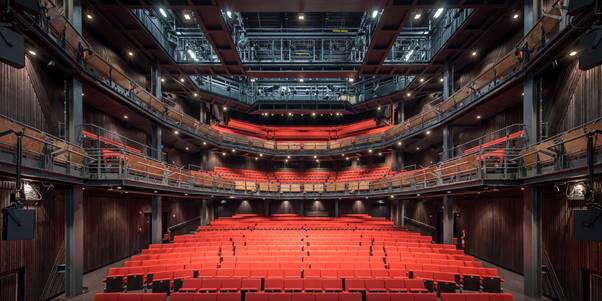 Music, comedy and dance are at the heart of the inaugural touring season at the Chester venue as its new 800-seater auditorium is revealed this week

Storyhouse welcomes the first show in its inaugural touring season this week – giving audiences the first chance to see its stunning 800-seater auditorium in all its glory.

Chester’s new £37m arts complex has enjoyed a spectacular and successful opening season of homegrown productions since it opened in May, with its company of actors performing in the intimate 500-seat thrust stage space.

But now the flexible theatrical auditorium is being transformed to be able to accommodate the season of big-budget musicals, innovative dance, thought-provoking theatre and household comedy names.

The autumn season opens tonight with toe-tapping 80s musical Footloose, which comes to Storyhouse as part of a UK tour. The hit show, based on the 1984 film, stars Maureen Nolan as Vi Moore and features a string of singalong hits including Let’s Hear It For the Boy, Holding Out for A Hero, and the title song Footloose. It’s now running until 9 September.

Comedy fans have snapped up tickets for Jon Richardson with the 8 Out of 10 Cats Does Countdown regular’s new touring show, Old Man, due to play to a sell-out audience on 19 September. He will be followed by Joel Dommett on 26 September, with an evening that promises confetti cannons and a musical number, and on 3 October by comedy giant Stewart Lee, whose show Content Provider is also a sell-out.

And later in the season the comedy continues, with grumpy old woman – and Splash survivor –  Jenny Eclair gives some tips on How to be a Middle-Aged Woman (Without Going Insane) on 19 October, while laconic American funnyman Rich Hall and friends present a gratuitous mash-up of the very best of comedy and music in Hoedown (21 October).

Comic opera company Opera della Luna pays its first visit to Storyhouse on 22-23 September with Tales From Offenbach, while musical All or Nothing, which charts the story of the influential 60s mod group Small Faces, known best for hit songs like Itchycoo Park and Tin Soldier, runs from 27-30 September.

October also heralds a trio of shows to delight dance and physical theatre enthusiasts, from Cockfight on 7 October, which is described as a cross between The Office and an Australian-style cage fight, to Tangomotion, which brings the passion of Buenos Aires to Chester on 18 October, and the brilliant all-male dance company BalletBoyz, presenting its new show on 30 October.

Singer-songwriter and folk music star Kate Rusby makes an appearance on 20 October to mark 25 years in the music business.

There’s a Pythonesque turn of events from 31 October-4 November with the arrival of the hilarious award-winning musical Spamalot, packed with bold – and not so bold – knights, ladies of the lake, fish slapping, flying cows, a killer rabbit and ferocious Frenchmen.

And the autumn touring season concludes with the powerful and thought-provoking physical family drama Things I Know to be True, at Storyhouse from 7-11 November.

The season of touring productions is followed by a world premiere, as Storyhouse presents the first ever stage adaptation of Enid Blyton’s beloved The Secret Seven. The magical Christmas show is penned by Glyn Maxwell and runs from 1 December to 15 January, with the theatre returned to a 500-seater venue for the run.

And looking ahead further, to Spring 2018, Storyhouse welcomes the hilarious The Play That Goes Wrong (29 January-3 February), Sarah Millican (22 February), David Baddiel’s Olivier Award nominated My Family: Not The Sitcom (23 February), and Cilla The Musical (5-10 March).

Artistic Director of Storyhouse, Alex Clifton, said: “We could not have asked for a better start to Storyhouse – audiences have loved the venue and our actors have had a wonderful time performing on the intimate thrust stage.

“Now it’s a chance to show the people of Chester just how versatile Storyhouse is, as we open up the space to become a full 800-seat auditorium and welcome what is a wonderfully varied and brilliantly entertaining season of shows to take us towards our first Christmas here.

“This autumn it’s all about having fun. And if you want to be amazed, uplifted and above all entertained, Storyhouse is the place to be.”

Storyhouse opened its doors for the first-time on 11 May with the inaugural home-produced season including a new version of The Beggar’s Opera, Alice in Wonderland, and Shakespeare’s A Midsummer Night’s Dream and Julius Caesar.

Green Spot at the Bluecoat

Ed The Campervan helping to create a new vision for Islington