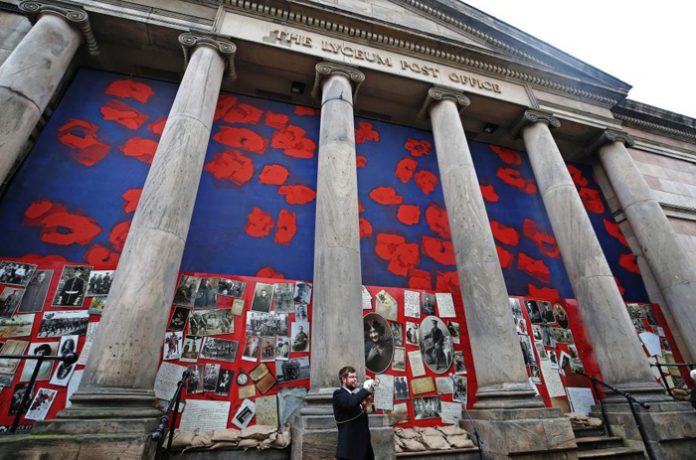 Letters and photographs from soldiers who fought and died at The Battle of The Somme have transformed an iconic Liverpool venue into a giant art canvas.

Entitled ‘Dolce et Decorum Est’, as a tribute to the WWI poem by Wilfrid Owen, the giant artwork now adorns the facade of The Lyceum in Bold Street and was poignantly unveiled on Friday, 10 June 2016 to a large crowd including relatives with a rendition of The Last Post, Owen’s poem, and release of a single red balloon.

Liverpool BID Company commissioned artists – The Sounds Agents – to reflect ‘the human story of the Great War’ in time for the centenary of the infamous battle in which 1 million lives were lost.

The giant commemorative artwork, which also reflects the pivotal role letters had on the morale on the Western Front, will animate the Grade II* listed former post office for at least the next nine months.

Designed by The Sound Agents: John Campbell and Moira Kenny, who made a public appeal for contributions, the installation is made up of five 14m high panels fixed between the building’s Doric columns, with graphics created by Jim Kenny.

The work also incorporates a poppy motif as a tribute to the fallen as well as a salute to the Weeping Window installation that adorned St George’s Hall, which attracted more than 350,000 people over the winter.

The project, which also has the support of the building’s owner’s Panther Securities, was devised as part of Liverpool’s Healthy High Street programme with the a focus on reducing the number of vacant units in the city centre.

Michael Doran, Communications Manager for Liverpool BID Company, which is co-funding the project via a levy raised on city centre businesses, said; “Today’s unveiling was very moving and especially poignant as we had so many relatives of those soldiers whose letters and stories inspired this work.

“We’re delighted with what The Sound Agents have created and the people of Merseyside have a unique opportunity to see a stunning work of art right on the high street that brings such a personal dimension to a story we think we all know – but very rarely can empathise with.’’

John Campbell, of the Sound Agents, said: “In the Great War, 12 million articles of post a week were moving between the front line and the home front. Parcels, postcards, photographs and letters. We just wanted to look at a selection from Merseyside and how those people dealt with the war. We’ve been overwhelmed with the support we received and are delighted that so many who talked to use can see their loved ones in this work.’’

Moria Kenny added: “Both of us have wept, reading the letters. The one that really got me was from Arthur’s sister Maude, who wrote to him to tell him their next door neighbour had made him a cake. And we knew that he was dead.”

‘Dolce et Decorum Est’ was commissioned by Liverpool BID Company and is supported by the Mayor’s Fund, LJMU Special Collections and Archives, Bill Sergeant Liverpool Pals and is linked with the Centenary Partnership Programme.

Local celebration of Young Disabled talent returns this week for its...