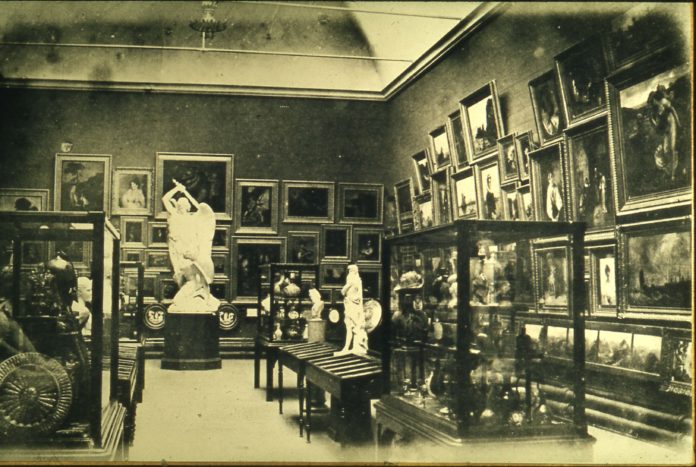 A special exhibition to celebrate the 140th anniversary of Warrington’s art gallery has launched, bringing together some of the best items in its collection.

Warrington Art Treasures is the first in a series of displays celebrating important events in the history of Warrington Museum & Art Gallery, including the opening of the Large Art Gallery in October 1877.

When the museum – the oldest public museum in the North West – opened in Bold Street in 1857 it was also home to the Warrington School of Art; the gallery was added to showcase the work of the school’s former pupils who had gained national and even international reputations and exhibited regularly at the Royal Academy.

The exhibition, which runs until 21 April, coincides with celebrations for the Royal Academy’s 250th anniversary which takes place next year, highlighting Warrington’s link with the Academy.

Janice Hayes, heritage manager for Culture Warrington, the charity which runs Warrington Museum & Art Gallery, explained the importance of marking such an occasion.

She said: “The 4th of October is a special date in our town’s history as it marks the official opening of the Large Art Gallery which houses fine art and contemporary collections.

“The museum and art gallery are an integral part of our town’s culture and heritage, and this anniversary is a great excuse to shout about our local history and the amazing items we have in our collection.

“In the mid-nineteenth century the new borough of Warrington was emerging as a leading economic and cultural centre in the North West.

“Warrington Museum played a key role in ensuring that the town’s artists were also part of the national arts scene; these Victorian aspirations are mirrored by the ambition of contemporary Warrington to become a UK City of Culture.”

Before the opening of the art gallery, the Bold Street Grade II listed building was also home to Warrington School of Art from 1857.

The Warrington Art Treasures exhibition features work by the school’s most famous pupil, Sir Luke Fildes, who progressed from illustrating for Charles Dickens and the 19th century newspaper The Graphic, to become a leading social-realist artist, confidant of painter/illustrator John Everett Millais and painter/sculptor Lord Leighton, before becoming a society portrait painter and respected Royal Academician.

Venetian genre paintings by his brother-in-law Henry Woods were a regular highlight of Royal Academy exhibitions and went on to feature in many public collections, and are now included in our very own Warrington Art Treasures exhibition.

Local sculptor John Warrington Wood was a prominent member of the Roman arts scene and was honoured with a specially commissioned work, a statue of Saint Michael overcoming Satan, which took centre stage when the new art gallery opened.

Also featured in the exhibition are works by local artists Edward Frederick Brewtnall and other Royal Academy exhibitors including Walter Langley and Frank Brangwyn.

The Quilling Guild Prepares to Celebrate 30th Anniversary in Liverpool