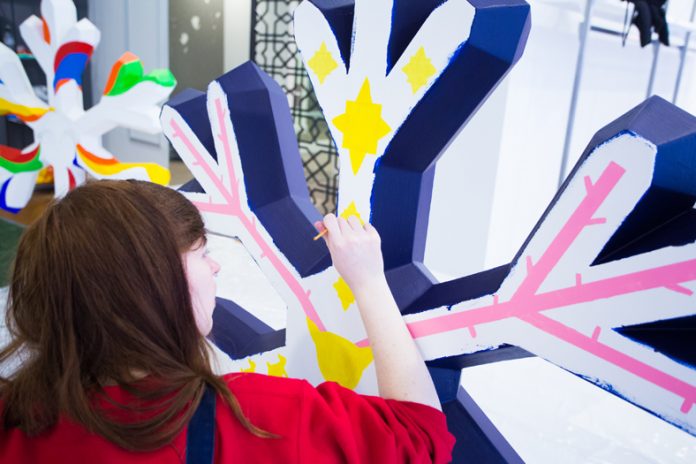 From 1 December – 3 January Liverpool city centre will be transformed into a festive spectacle by the return of the Snowflake Trail, the city’s very own winter festival that will capture the imagination of young and old alike.

After a national call for submissions the successful 12 snowflake designs from more than 120 artist’s submissions can now be revealed. This year’s artists come from as far afield as Bath and York is well as Liverpool and their creative designs range from a giant Christmas pudding to star constellations and exotic animals. They can be seen decorating their snowflake sculptures in their temporary snowflake workshop on Church Alley in the city centre for the next ten days (details below).

Bill Addy, Chief Executive of Liverpool BID Company along with City Central BID Chairman Ian Strettle chatted with some of the artists at work today.

Whilst at the snowflake workshop Bill Addy said:

“We’re happy to bring The Snowflake Trail back for its third year to create a unique experience for residents and visitors to Liverpool.

“The trail is going to take people on a magical story-led journey to discover wonderful pieces of art in beautiful locations while they shop and dine along the way.

“We’re delighted with the level of support and engagement from our BID members, from giving away prizes and promoting the trail to hosting key features of the trail and bringing the story alive.”

Another popular element of the trail is the Church Street Christmas Tree, a beautiful natural Sytka Spruce standing over 17 metres tall. This year it will be decorated by hundreds of school children from 24 local schools. Working with artist Simon Armstrong and lead school Broughton Hall Catholic High School, each child has designed and decorated their own link in a giant illuminated paper chain that will adorn the tree throughout the festivities.

This year’s Snowflake Trail also offers spectacular prizes donated by Liverpool BID Company members. Win an incredible weekend for 4 in Liverpool worth £1,200 including a night at a city centre hotel, gift vouchers, meals and entertainment. There are also 3 runners-up prizes including; a silver pendant, an Everton experience and a theatre night-out.

December and answer the simple question, then submit your answer via email or freepost. The free to enter competition will draw the winners on 6 January. Plus throughout December there will also be a number of spot prizes given away to people who have used the #SnowflakeTrail on social media  – so share your pics!

Alongside the spectacular light installations and soundscapes this year for the first time there will be interactive illustrations brought to life with a SmartPhone app and a magical, 3 metre high, illuminated musical instrument for everyone to play with – watch out as full details are revealed on 1 December!hristmas,

The Snowflake Trail is brought to you by Liverpool BID Company and produced by Open Culture on behalf of businesses in the city centre.

Microclimates at 34A Slater Street