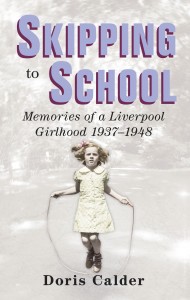 The evocative memories of growing up before, during and after the Second World War in Liverpool

For most children born in the 1930s the Second World War would define their childhood. Watching their fathers leave for service and mothers adapt to life on the home front radically changed their way of life. For Doris Calder, a girl who grew up in Liverpool during the war, the experiences are still starkly engrained into her memory.

Doris Calder’s Skipping to School: Memories of a Liverpool Girlhood 1937-1948 is a collection of memories from Doris’ childhood from 1937 through to 1948 – the period running right through the Second World War. The book provides a startling insight into the life of a child growing in wartime Britain. Witness how Doris and her friends dealt with the strains of rationing, survived the horrors of the Blitz and faced the tragedy of bereavement.

The author Doris Calder attended Arnot Street School in Walton and Queen Mary Grammar School in Liverpool before going on to work in the Liver Buildings. In her youth she enjoyed travelling and attended the World’s Fair in Belgium in 1958. Now retired, this is her first book.

Stories From The City – Pick Up a Copy