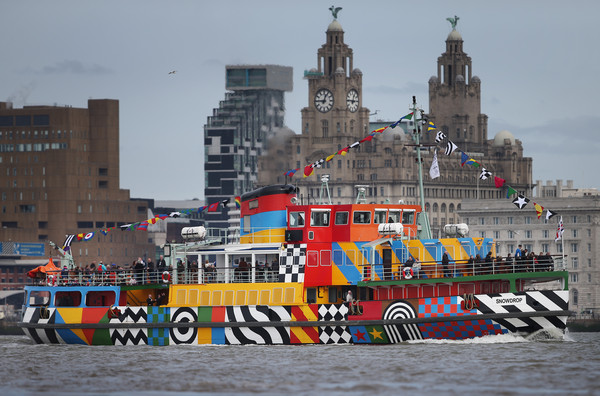 Snowdrop, the Mersey Ferry hiding beneath that dazzling livery has had a temporary make over, courtesy of Liverpool Biennial, Tate Liverpool and 14-18 Now WW1 Centenary Art Commissions. Taking the idea of ‘dazzle’ camouflage to the next level, kinetic optic artist Carlos Cruz-Diez and monochrome enthusiast Tobias Rehberger have today been joined by the third and final artist to be commissioned for such a work.

The large-scale and fully functional ferry, unlike the other two Dazzle Ships, will spend the next 18 months ferrying passengers across the Mersey, treating onlookers and those on board to an eyeful of Pop Art-inspired contemporary design. As well as its vibrant new paint job, the ferry will house an on-board exhibition, demystifying the world of dazzle camouflage and celebrating the work of Sir Peter Blake. Drawing upon his signature pop art style, the design is based on Blake’s use of and interest in colour, monochrome and shape, with iconic Pop Art emblems such as the ‘target’ used to dazzling effect in the painting of the vessel.

Peter Blake is a leading figure in the development of British pop art and his work is synonymous with the use of imagery from modern culture, including comic books, consumer goods and advertisements. During his career he developed strong links with Liverpool and first visited the city during his National Service with the RAF (1951 – 53). Best known up North for his musical partnership with the Fab Four, Sir Peter Blake today solidified his connection with the city by dazzling our beloved ferry!

Care to take a ride? Visit www.merseyferries.co.uk to find out more.

A Foundation Has Closed