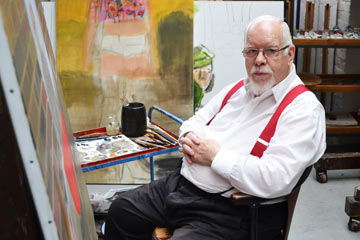 Sir Peter Blake has been named as the first patron of the John Moores Painting Prize, the UK’s biggest painting competition.

He will represent the competition and has taken on this role 50 years after winning the Junior section of John Moores 3 with his painting ‘Self Portrait with Badges’ in 1961.

Peter Blake is perhaps most famous for designing the cover of The Beatles’ album, ‘Sgt. Pepper’s Lonely Hearts Club Band’ (1967). However, he has been a prolific artist during his career and his status in the art world far exceeds Sgt. Pepper’s.

The Walker Art Gallery is also currently hosting ‘An Alphabet’, a display of one of Peter Blake’s alphabet series. On until 4 December 2011, the display is made up of 26 silkscreen prints.