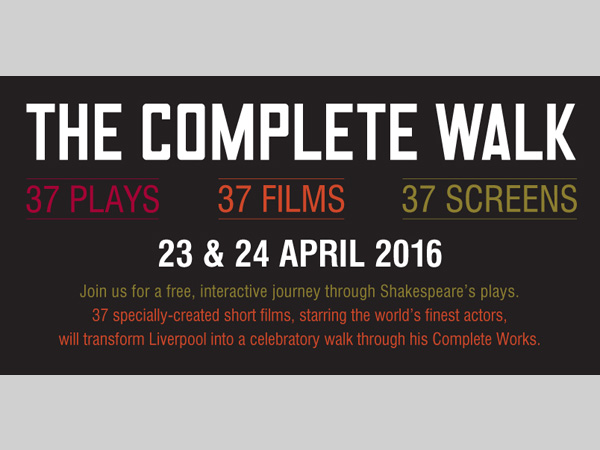 LIVERPOOL is getting ready to host a very special tribute to one of the world’s most famous playwrights.

Announced last month by Shakespeare’s Globe, Liverpool is the only UK city, so far, outside of London to host The Complete Walk.

The free project will see a series of 37 short films played on screens at city centre venues on Saturday 23 and Sunday 24 April 2016 marking the 400th anniversary of Shakespeare’s death.

The Florrie, Liverpool Philharmonic Hall, Kazimier Garden, the Town Hall, Aloft hotel, Liverpool Cathedral, Granby 4 Streets and Tate Liverpool are just some of the venues who will be hosting the rolling ten minute films.

Liverpool Everyman’s and Playhouse Associate Director, Nick Bagnall has directed three of the films – Henry VI parts two and three, which will both be shown at the Everyman, and Titus Andronicus which stars Peter Capaldi will be shown at the Playhouse due to Peter’s starring role in The Ladykillers at the venue in 2011.

Nick said: “It has been an absolute delight to make these short films for Shakespeare’s Globe for their Complete Walk.

“I have a very close relationship to all three of the plays I directed for the project and to realise them on film with the most astonishing group of actors has been invigorating. I am thrilled that the films will be shown in Liverpool and it is a great coup for the city. I hope visitors enjoy watching them as much as I have enjoyed making them.”

Assistant Mayor and Cabinet Member for culture, tourism and events, Councillor Wendy Simon, said: “When it was announced last month that Liverpool was to play host to this special event we had a fantastic response from organisations in the city centre.

“Many of the venues believed they would be the perfect hosts for particular films – because of the Bluecoat’s balcony they opted for Romeo and Juliet, the courts at St George’s Hall’s fit in well with The Merchant of Venice and As You Like It was the first Shakespeare play to be performed on the Unity Theatre’s stage in 1945.

“There is a real variety of organisations taking part, from the cathedral to bars, hotels to tourist information centres which is an added element for the people taking part in this special Shakespeare trail.”

33 venues are involved in the project. The films they are showing and the times (which are subject to change) are as follows:

Andrea Nixon, Executive Director, Tate Liverpool said: “A Midsummer Night’s Dream is one of Shakespeare’s most loved comedies and transports all those who watch it. At Tate Liverpool we believe art can be a transformative force: we’re delighted to be part of The Complete Walk and to be celebrating the lasting legacy of one of the world’s greatest playwrights.”

Eryl Parry, Director of Enterprise at Liverpool Cathedral, said: “Hamlet is one of Shakespeare’s most popular plays, and of course, packed full of famous quotes that have become part of our language: “to be or not to be, that is the question”, “to thine own self be true” and “the lady doth protest too much, methinks” to name but three!

“To show this, of all films in probably the least known part of our magnificent Cathedral (two floors up, but with lift access), will be a real one-off and memorable experience.  It is always great to be part of city-wide festivals, and like so many others here we’re sure that it will capture the imagination and allow people to enjoy our great spaces in a new and creative way.  “Though this be madness, yet there is method in’t!”

Michael Simon, Community Development Manager for the Granby 4 Streets CLT said: “Granby Street, is known for its rich and culturally diverse history; with stories from across the globe converging to form a particular narrative of identity and place.

“It’s funny in some ways that the immortal plays of Shakespeare reflect similar issues that permeate our community today – belonging, loss, changing identity and most of all love! That is why we at Granby 4 Streets CLT are delighted and honoured to be involved in the hosting of The Complete Walk, such a prestigious event will allow us to continue in cementing the diverse ‘voice’ of our community within the history and wider cultural renaissance of Liverpool.”

Liverpool’s Complete Walk is being sponsored by Edge Hill University.

Director of Corporate Communications, Roy Bayfield, said: “Edge Hill University is delighted to support The Globe Theatre and Liverpool in this exciting celebration of Shakespeare. Our students from literature, drama and media courses will be experiencing a truly innovative international event, right on their doorstep.”