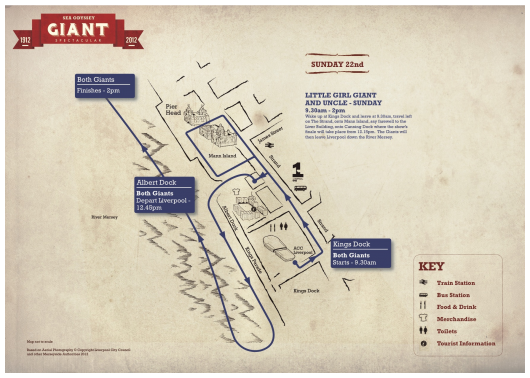 Sea Odyssey is just weeks away and the story is unfolding – Since the announcement of this year’s biggest street theatre event last September, there has been mystery and speculation surrounding the reason why two giants will be roaming the city streets from 20-22 April.

And now Liverpool and the world-famous French marionette experts Royal de Luxe are inviting everyone to be part of this special journey.

The action begins at 9.30am on Friday 20 April when the 30 foot Little Girl Giant wakes up in Stanley Park.

The Little Girl Giant is on a quest to receive news about her father, a stowaway who died on the ill-fated Titanic.  The next stop in her search is Liverpool, a city which she sees as a hub of creativity, with passionate friendly people and rich in maritime heritage and beautiful architecture.

Unbeknown to the Little Girl Giant, her Uncle made a promise to scour the ocean floor for the shipwreck and put his brother to rest, and in doing so discovered a letter written by him to his beloved daughter.  For the past 100 years he has walked across the ocean floor with the sole purpose of delivering the letter to its young owner. And now he’s set to emerge from the depths of the Mersey…

But as they cover 23miles, roaming the city in search of a family connection, will they find each other?

Leader of Liverpool City Council, Councillor Joe Anderson, said: “Great cities inspire great artists – so it’s fitting Liverpool is the inspiration for and host of this breathtaking artistic event – the scale of which has rarely been seen in this country before.

“The emotion and humanity Royal de Luxe is set to bring to Sea Odyssey will resonate with the hundreds of thousands of people we’re expecting to descend on the city over the three days.

“This magical story really will be a spectacle and one which people won’t have witnessed on our streets since 2008.  To have the world’s leading street theatre company bring the event to Liverpool is a real coup and another example of how internationally renowned artists want to showcase their work against the fantastic backdrop of our city.”

This is one of the most complex events ever staged by the city council, and the team has planned the route so that as many people as possible can experience the event.

And, did you know…

However, due to its scale, residents and visitors are warned that there may be some disruption as a result of road closures across the three days.

The route for the giants will be as follows:

Wakes up at Kings Dock at 9.30am and then travels left on the Strand, up Chapel Street, Tithebarn Street, Moorfields, Dale Street, Castle Street, James Street, crosses the strand to Mann Island, arriving at the Pier Head at 12.30pm.

Following a siesta at the Pier Head, she will wake up at 4.30pm turn right onto Canada Boulevard, onto Mann Island, James Street, Castle Street, Cook Street, Victoria Street, Stanley Street, Whitechapel, Paradise Street (Liverpool ONE), Liver Street, onto the Strand, Queens Wharf, arriving at Kings Dock 7pm where she will sleep.

Following a siesta at St George’s Hall, he will wake up at 4.45pm and walk down Lime Street, Renshaw Street, Berry Street, Nelson Street, St James Street, Blundell Street, Queens Wharf, arriving at Kings Dock 7pm where he will sleep.

Wake up at Kings Dock and leave at 9.30am, travel left on the Strand, onto Mann Island, say farewell to the Liver Building, onto Canning Dock where the show’s finale will take place from 12.15pm.  The Giants will then leave Liverpool down the River Mersey.

Find out the latest information on Sea Odyssey by ‘Liking’ the Giant Spectacular page on Facebook or by following the Giants Journey on Twitter.  You can also find out more by calling 0151 233 2008