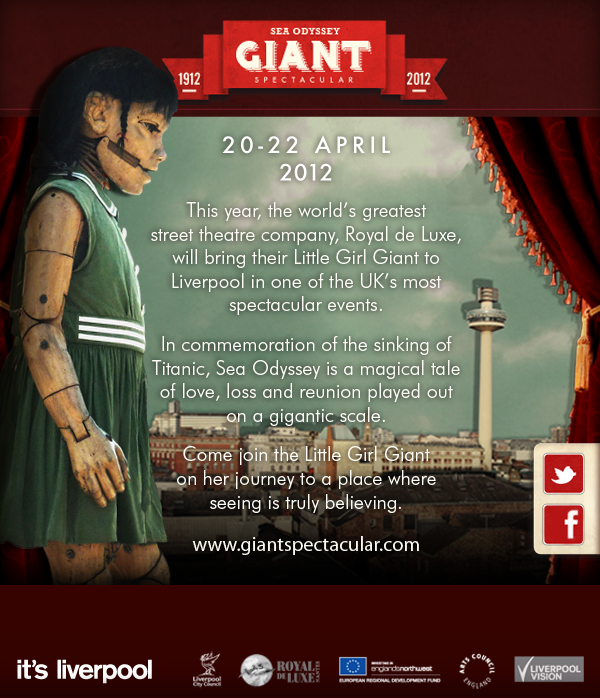 North Liverpool will take centre stage for the city’s biggest ever outdoor event. 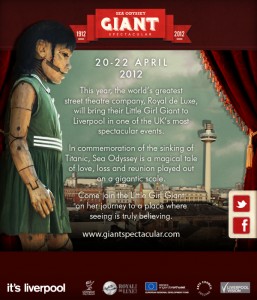 For the first time in the city’s event history, around half the action will focus on North Liverpool.  It is hoped Sea Odyssey will be a transformational event for this part of the city, beginning to showcase its potential development and investment opportunities.

The event forms part of the Liverpool Plan which aims to change perceptions of the city and have partners working together to promote the city in a positive way.  It also supports the high ambition of the area set out in the long term development framework for North Liverpool and South Sefton which seeks to unlock the potential in the area, enabling it to flourish and once again become a vital source of prosperity, enterprise and creativity.

It’s estimated the event will attract an audience of around 250,000, and as a result engender pride among local residents, inspire creativity and build community cohesion.

The star of the show will wander around areas including Stanley Park, Walton Lane, Breck Road, Everton and Anfield.  On her travels the Little Girl Giant will explore the areas around both football clubs, reflecting the importance of sport to Liverpool.

And as North Liverpool is host to one of the most stunning vistas of the city, the beautiful marionette will take in the view of Liverpool from the top of Everton Park.

Liverpool city council’s cabinet member for culture and tourism, Councillor Wendy Simon, said: “Sea Odyssey will be a seminal event for the city.  We want the occasion to not just be a huge success for the city in April, but bring a longer lasting legacy as a result of the area being placed in such a unique spotlight.

“Tens of thousands of people visit the north end for football matches, but rarely spend any more time there, so this is the perfect opportunity to show off the area and its potential, and as a result, hopefully encourage investment.

“Everton Park is a prime example of a significant city asset in close proximity to the city centre which some people, even Liverpudlians, may not be aware of – so it’s a case of highlighting these hidden gems and transforming people’s perceptions of the area.

“These will be the first steps towards significant regeneration and investment and the event will prove to be a real catalyst for positive change, not just for the area, but for the entire city.”

The free event takes place from Friday 20 to Sunday 22 April and is set to be the most complex event the city council has ever staged.  The full route and visited locations will not be released until a few weeks before the event, but along with North Liverpool, parts of the spectacular will also take place in the city centre.

The Sea Odyssey team at the city council has been working with local residents, businesses, cultural organisations and registered social landlords in the area to discuss the event and find out how they can make the most of the opportunities which will arise from the April extravaganza.

Beautiful North, which represents around 40 organisations which work together to encourage investment and job creation, has been involved in the talks.

Erika Rushton, Neighbourhoods Director at Plus Dane Group, the Liverpool based housing association which coordinates Beautiful North alongside the city council, said: “North Liverpool has many assets and hidden gems and through our North Liverpool Show Your Beautiful Face campaign, Beautiful North partners have been working together to highlight everything that’s positive and beautiful about its people and places.

“Sea Odyssey is an unrivalled opportunity to showcase the best of North Liverpool to the rest of the city and beyond, and we’ll be working hard with North Liverpool residents and businesses to make sure that it looks its best for the event and makes the most of its moment in the spotlight.

“We are also committed to ensuring that Sea Odyssey leaves a lasting legacy for the area – Beautiful North is here for the long-term and our job is to ensure that this event helps drive improvements that are maintained and built on for many years to come.”

Funding is in the final stages, but will be a mixture of public and private investment.  There is already support from the National Lottery through Arts Council England and the European Regional Development Fund and Sea Odyssey is the final event which will use European legacy funding from the city’s Capital of Culture year in 2008.

Arts Council England has given nearly £200,000 for the event.

Sarah Maxfield, Regional Director of Arts Council England, commented: “We are very happy to be supporting this event and enabling this world renowned company to bring their work to Liverpool.

“We applaud Liverpool City Council’s vision and ambition in recognising the benefits that the arts can deliver to communities and to the economy and we are pleased to be working in partnership with them to ensure those ambitions are realised.

“Liverpool is at the forefront of outdoor performance events in the UK and Sea Odyssey promises to be an extraordinary, spectacular and – given the links to the Titanic anniversary – a moving experience.”

The full details surrounding the story for the Little Girl Giant will be revealed nearer the time.