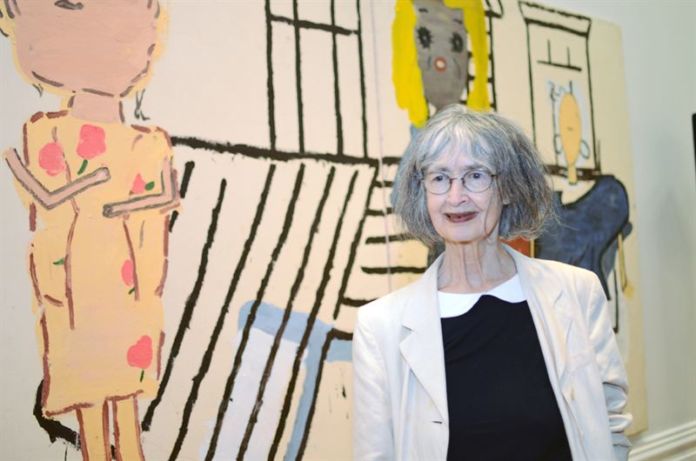 Rose Wylie was announced the 29th winner of the John Moores Painting Prize on Friday 19 September at the Walker Art Gallery where the Prize was established almost 60 years ago.

Rose was awarded the £25,000 first prize, which is sponsored by David M Robinson, for PV Windows and Floorboards, selected from more than 2,500 entries.

The painting, which features four disjointed female figures set in a linear white gallery space, is typical of Rose’s work. Often drawn from protracted memories, the compositions of her paintings appear as dream-like sequences, in which details are imperfectly recalled and sketchily represented.

The name Rose Wylie now joins an impressive lineage of UK painters who have been awarded the prize. From David Hockney (1967), Mary Martin (1969), Peter Doig (1993) and Sarah Pickstone (2012), who announced this year’s prize, the John Moores’ ‘back catalogue’ of winning paintings (most of which reside in the Walker’s permanent collection) represents over half a century of British Art; featuring Kitchen Sink realism, abstraction, pop art and figuration.

The four shortlisted artists who each receive £2,500 are:

A major part of the Liverpool Biennial, the John Moores Painting Prize is a free exhibition which runs until 30 November 2014. Fifty paintings (including the prizewinners) were selected for exhibition from more than 2,500 entries.

Dubbed the ‘Oscars of the painting world’, the Prize, organised in partnership with the John Moores Liverpool Exhibition Trust, has been keeping its finger on the pulse of contemporary painting for almost 60 years.

The John Moores Painting Prize with Alexei Sayle is aired at 7pm on 21 September on BBC 4. The programme, which examines the history of the Prize as well as its place within contemporary art, includes interviews with this year’s five shortlisted artists as well as Sir Peter Blake, Peter Doig and Jake Chapman.

Take a Tour of Turning The Place Over