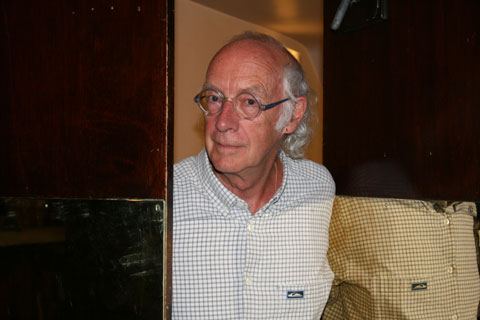 Poet Roger McGough needs the public’s help to create a one-off piece of art for the new Museum of Liverpool, to go on display later this year.

The Liverpool Doors project will feature doors donated by the public, to form artwork commissioned by National Museums Liverpool, which Roger McGough will create with art students from Liverpool John Moores University (LJMU).

Each door will be symbolic of a personal memory relating to a place and time, and the history and geography of the city itself. The artwork will also feature a door from the Everyman Theatre chosen by Roger himself prior to the theatre’s redevelopment, as his own celebration of a place close to his heart.

Roger said: “People of Merseyside we need your doors! Front doors, back doors, bathroom and outside toilet doors. Doors from nunneries and night clubs, pubs and cafes, confessional boxes, police cells and schools. If you door has a story to tell, then so much the better.”

The doors will be turned into a giant ‘book’, featuring selected verses from the Liverpool Saga, which inspired hundreds of local people to turn their minds to poetry to celebrate Liverpool’s year as European Capital of Culture in 2008.

Bill Longshaw, curator of the Writing Liverpool exhibition in the Museum of Liverpool said: “Don’t bring us your doors just yet. In order for us to select the doors and stories most suited to the project, please send us a photograph of your door, a brief explanation in no more than 100 words saying what is special about it, and why you think it should be displayed in the new Museum.

“The chosen doors will be collected by the Museum of Liverpool team so that Roger and the LJMU students can give them a new lease of life as artworks, and reveal something of the doors’ adventures. So be prepared to take your door off its hinges!”

The doors will go on display in the second phase of the Museum of Liverpool, opening later this year.

If you would like to put forward your door for the Liverpool Doors project, please email your photograph and 100 word explanation to museumofliverpool@liverpoolmuseums.org.uk

Alternatively, you can write to:

All entries must be in by 31 July, and unfortunately we will not be able to return the doors once they have been selected and used for the project.

‘Face of the City’ Project