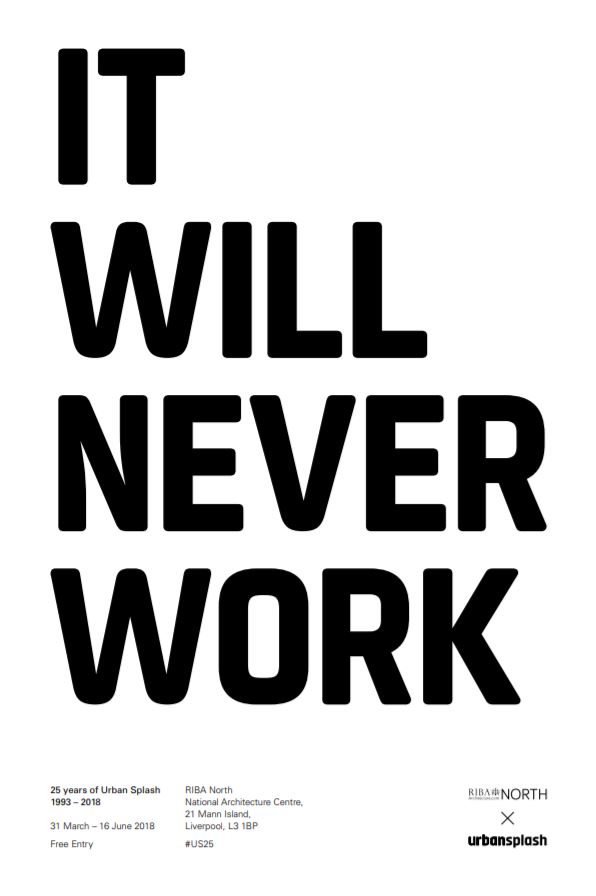 Award winning Manchester-based regeneration company Urban Splash, which was founded in Liverpool in 1993, is coming home next month with the launch of a new exhibition ‘It Will Never Work’. The exhibition will celebrate Urban Splash successes, working with some of the UK’s most talented architects, notably the significant haul of awards they have picked up over the years, including fourteen separate RIBA Awards as clients.

The exhibition, which has been curated collaboratively by RIBA North and Urban Splash, is being shown at RIBA North, RIBA’s National Architecture Centre, to mark the developer’s 25th anniversary. It will chronicle the accolades awarded to Urban Splash developments, from small projects to the RIBA Stirling Prize shortlist as well as the company’s maverick presence on the development landscape.

Urban Splash profess to have started without a plan, purposefully ignoring advice and routinely rejecting accepted development processes. At every step ‘it will never work‘ has been a call to action rather than a discouragement. This exhibition considers how significant Urban Splash projects were shaped by their contemporary cultural backdrop; from loft living in Northern cities – like Liverpool in the early nineties – through boom and bust, to the reinvented modular House and future neighbourhood projects in progress today.

The exhibition will not only be relevant to those interested in regeneration, architecture and design, but will also shed further light on those socio economic conditions that led to the decline and the re-emergence of great Northern Cities, and will touch on the emerging ideas that aim to protect their future sustainable growth.

“We’ve had such an exciting 25 years using great design to create transformative projects around the country and I’m thrilled we can now return to our founding city to celebrate the work we’ve done.

It was in the Ropewalks area that Tom Bloxham and I first met and decided to take on the challenge of transforming Liverpool Palace; we’ve come a long way since then and this exhibition looks at those early efforts right through to the developments we are working on today.”

“It’s been a humbling exercise looking back at the roots of the business; this is an exciting opportunity to chronicle the work we have completed and set out our plans for transforming even more places in the coming years.”

“It Will Never Work is an unplanned trip from Madchester to Brexit via Easyjet and driverless cars, with a quick history of unorthodox thinking and a few buildings along the way.  We are delighted to unveil this exhibition which will give visitors a chance to explore some key Urban Splash projects and ‘peek under the bonnet’ of the company.”

The exhibition will run for three months before going on tour in the UK with dates and locations to be confirmed.