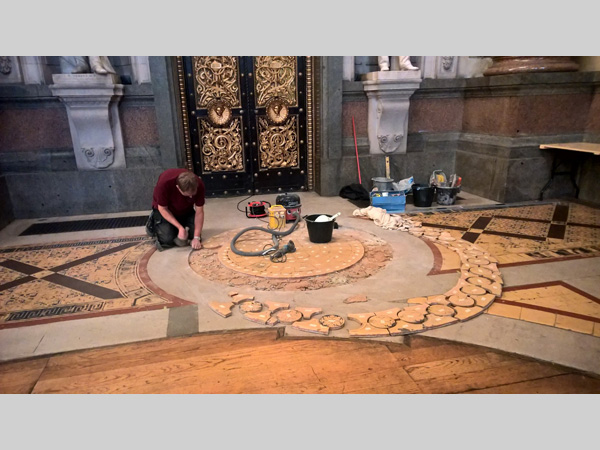 Major restoration work is currently underway at St George’s Hall Liverpool to restore specific areas of the stunning tiled Minton floor back to their full glory.

St George’s Hall Liverpool is the world’s best example of an encaustic tiled floor. But over time, five of the Great Circles of the tiled floor have become badly worn and colours have dramatically faded.

This restoration will bring the striking designs back to life with brilliant colour. The faded tiles will be replaced with exact replicas. The original tiles will be retained and displayed to the public in the St George’s Hall Heritage Centre.

This is the first major repair to the Great Hall since the iconic venue opened in 1854. St George’s Hall Liverpool is Grade I Listed and is widely regarded as one of the finest neo-classical buildings in the world.

The five Great Circles are located around the perimeter of the Great Hall and have been identified as the key areas for restoration. Work on the first area is currently underway.

The areas form part of the natural walkway round the Great Hall, and were originally the route into the Crown Court, therefore they have become severely worn over time. This is the first phase of significant restoration and will be complete next week. The other four areas will follow in the coming months.

The tiled floor in the Great Hall was originally installed in 1854 and demonstrated the significance of the city and its maritime history. The tiles were manufactured by Minton, the most renowned producer of encaustic tiles of the Victorian era. Minton’s heritage includes producing tiles for the Palace of Westminster and Washington’s Capitol Building.

Encaustic tiles became the height of fashion in Victorian architecture. Encaustic comes from the Greek word meaning to ‘burn in’. Different colours of clay are used to create an encaustic tile, meaning the design is actually created within the body of the tile itself therefore lasting for many years.

As late as the 1990s, the floor has been considered as being ‘at risk’ pending its protection and future up keep and restoration. Now the hall is fully open to the public, a balance has been developed to ensure the majority of the floor is preserved as original.

Through the fundraising efforts of the Trustees of St George’s Hall; The Friends of St George’s Hall, and the support of Liverpool City Council, £73,000 has been raised to create the template and produce the tiles for the repair of the first circle.

Alan Smith, General Manager of St George’s Hall Liverpool, commented: “Protecting and preserving the Great Hall and its world famous Minton tiled floor is paramount to retaining the history of St George’s Hall Liverpool. The Hall is now fully open and enjoyed by the public, however with that brings the task of introducing repairs to key areas at the main entrance areas.

“The Hall is home to one of the finest examples of an encaustic tiled floor in the world, so to be able to repair the floor to enhance the overall appearance and restore it to its full glory really is fantastic news. On behalf of the public who are going to enjoy the Great Hall for many years to come, I would like to thank our funding partners who have made this possible.

“During the 20th Century, the Minton floor was only shown six times. However, since the Hall reopened in 2007 the floor has now been showcased seven times in just nine years. Its increasing popularity shows just how important it is to the people of Liverpool and also as a major tourist attraction for the Liverpool City Region Visitor Economy.”

The Great Hall was originally designed with a stone floor but after the appointment of Cockerell as architect, it was changed to a tiled floor. The original designs were rejected for being too “commonplace”, and the ultimate design was influenced by Ludwig Gruner who, at the time, was Advisor in Art to Queen Victoria.

Experts Craven Dunnill Jackfield Ltd from Shropshire, who specialise in encaustic tile manufacturer, have been commissioned to create the bespoke tile. They will be installed by world expert restorer of Minton tiled floors, Brian Joyce from Maw & Co Ltd, who has worked across the globe on some of the biggest Minton restoration projects.

The work on the remaining four Great Circles will take place throughout 2016.

St Helens named as the first Borough of Culture