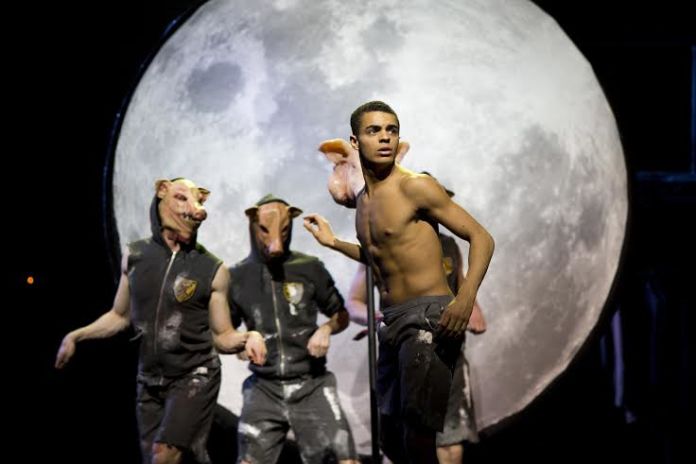 An dance adaptation of William Golding’s classic dystopian novel is currently playing at Liverpool’s Empire Theatre thanks to Matthew Bourne and the team from New Adventures.

A bit of background first: Re:Bourne is the community-focused strand of New Adventures, Matthew Bourne’s ever-growing ballet production company. Focusing on providing opportunities for kids across the country to get involved in theatre, the project relies on local “ambassadors” to seek out new talent in cities around the UK. For the Liverpool-leg of the 13 city tour, the producers auditioned over 900 boys from across Merseyside, with around 20 joining the cast. What is inspiring is that many of the chosen performers had never danced before; Bourne’s ‘legacy’ programme encourages children who wouldn’t normally consider themselves dancers to take to the stage, and by reeling the boys in with gymnastics workshops, shows them that dance isn’t just for girls.

Golding’s 1954 classic is reimagined for the stage, in this original and innovative adaptation. Beginning with a stage full of obedient school boys, marching in lines to an introductory score not unlike the choral section of Rolling Stones’ hit You Can’t Always Get What You Want, the music quickly changed tone and darkened, symbolising the crash landing of the school group on a deserted island, without an adult in sight. From panic to celebration; the class realise they are free from rules and the sorry scene soon takes on a party atmosphere, as the boys revel in their newfound adventure.

The dance numbers in the first part of Act One were few and far between, and unfortunately there wasn’t enough going on to maintain audience engagement. However, the use of a drumstick to portray the conch shell, the item signifying the boy in charge, was a great idea and worked well with the set, as the dancers beat barrels to the rhythm of the music, energising the whole spectacle.

As the story progressed and we came to the infamous scene in which Simon stumbles upon the severed pigs head and imagines it as ‘the lord of the flies’ the action quickened, and the choreography stepped up a gear. This set the tone for the final act, and the last thirty minutes of the show were fast-paced, emotionally-charged and packed with the very best in up and coming dance talent.

Thankfully, in a Q&A after the show, the team revealed there are plans to stage a similar project for the aspiring female dancers itching to be part of one of Matthew Bourne’s productions, and we are looking forward to seeing what that show might be.