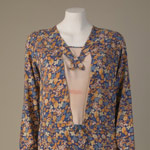 Fourteen garments owned by a Liverpool doctor’s wife, Emily Tinne, give a personal insight into the life of the middle-class in post-Edwardian society.

The maternity dress is among several of the items which have never been on public display before. It is one of three surviving maternity garments from the collection, although it was likely there were many more as Mrs Tinne had seven children between 1911 and 1929 and was an avid shopper.

Pauline Rushton, Curator of Costume and Textiles said: “Historic maternity wear is incredibly rare. One reason for this might be that women in the past, just like some of us today, may have felt a sense of relief at regaining their previous shape after nine months of carrying a baby. They probably passed on or disposed of their maternity wear, just as we do now.

“The Tinne collection is so remarkable because much of it is so beautifully preserved including this tussah silk maternity dress.”

Although Mrs Tinne was an enthusiastic shopper, some garments were never actually worn. A number of the items still have their original shop label, a useful indication of where the middle classes shopped and the wealth of fashion which was available in the in the city for those who could afford it.

There are more than 700 items in the Tinne collection. Donated to National Museums Liverpool by her daughter, the late Dr Alexine Tinne,this is probably the largest surviving collection of period clothes from one person’s wardrobe in Britain.