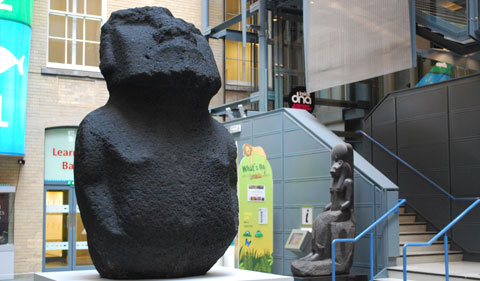 A rare statue from the mysterious island of Rapa Nui – widely known as Easter Island – has gone on display at World Museum.

The island is renowned for its moai, colossal stone figures mounted on rectangular stone  platforms (ahu). Quarried from the volcanic crater Rano Raraku, these statues are thought to honour the ancestral chiefs of the Rapanui people.

The statue Moai Hava is special because it is different. It is made from basalt as opposed to volcanic tuff and unlike the other statues, Moai Hava may never have stood on a ceremonial platform, and its significance and purpose is unknown.

Curator of Oceanic Collections, Lynne Heidi Stumpe says: “We’re really excited to see him, as there are only two of these Rapa Nui statues in the UK and Moai Hava isn’t usually on display. Luckily he’ll be here for a while, at least a year.”

The human figure is depicted from the hips upwards, with its arms and hands to the side. The square head tilts backwards with the chin thrust out, while the eyes appear to be tightly closed. It was probably created between 1300 and 1500 AD and stands 1.56m high (5ft 11/2 inches). It weighs an enormous 2.40 metric tons – equivalent to approximately 32 people of 12 stone each.

Moai Hava left Rapa Nui on 2 November 1868 on the voyage of HMS Topaze, led by Commander Powell. During this survey for the Admirality, a Rapa Nui guide led an officer from the ship to a burial ground in the Mataveri area of the island.

The stone figure was almost entirely buried when it was discovered. It was recorded by Richard Sainthill, Paymaster on HMS Topaze, as “an ugly lump of stone, about four feet high, almost featureless; they called him Moai Hava, and he is now a passenger on board the ship”.

All of Rapa Nui’s statues or moai have individual names. ‘Hava’ which translates as ‘to be lost’ may refer to the loss of the deceased. But it could also mean the loss of the statue, as it was taken away by the Topaze crew.

The population of Rapa Nui all but died out in the 1860s due to a devastating combination of over-population and famine, disease, deforestation and slave raids. This has led to a modern-day fascination with the island’s mysterious-looking statues, and wild theories relating to UFOs and Atlantis falsely credited with their vanishing. Contrary to popular opinion, the style of the statues is typically Polynesian and the origins relatively well-known.

The blockbuster movie, Night at the Museum, made the ‘Easter Island figure’ synonymous with a museum visit. However, in reality, few moai can be seen within museums, making Moai Hava’s visit to World Museum extra special.

Moai Hava was donated to the British Museum in 1869, along with the larger Hoa Hakananai’a that is on show there. This is a rare chance to see Moai Hava, as it isn’t usually on display. The statue has been kindly loaned by the British Museum, and will be at World Museum for at least one year.

In an Ideal World at St Brides

Life on Board: New gallery to open at Merseyside Maritime Museum...