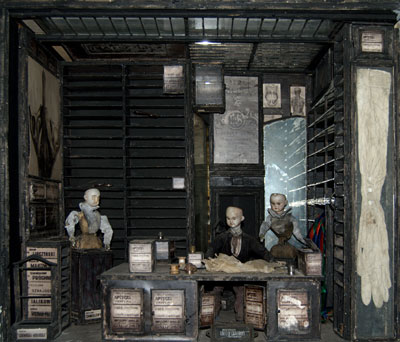 QUAY BROTHERS’ FILMS TO BE SCREENED AT VICTORIA GALLERY & MUSEUM

Films by cult directors, the Quay Brothers, are to be screened at the University of Liverpool’s Victoria Gallery and Museum on Thursday, 26 May.

The Dormitorium exhibition features 10 miniature-sized film sets including puppets, props and characters which have been used in the Quay’s unique and innovative films.  To accompany the exhibition, a selection of short films by the Quay Brothers are being shown including, ‘This Unnameable Little Broom’ and ‘Street of Crocodiles’, which was selected by Terry Gilliam as one of the top 10 best animated films of all time.

The Quay Brothers’ films are described as surreal, moody and macabre representing a world frozen in time, full of cobwebs and dust, mirrors and strange machines.  The brothers are heavily influenced by Eastern European visual and literary culture and a selection of short films by Eastern European directors who influenced the pair -Jan Svankmajer, Jan Lenica and Waldyslaw Starewicz – are being screened on Thursday, 19 May, 1 – 2 pm.

The Piano Tuner Of Earthquakes, the Quay Brothers’ second feature film, will be shown at FACT cinema on pm18, May at 6.30pm in the evening. The film tells of an Opera singer stolen on the eve of her wedding by an evil composer who turns people into musical automatons and can only be saved by a young piano tuner.