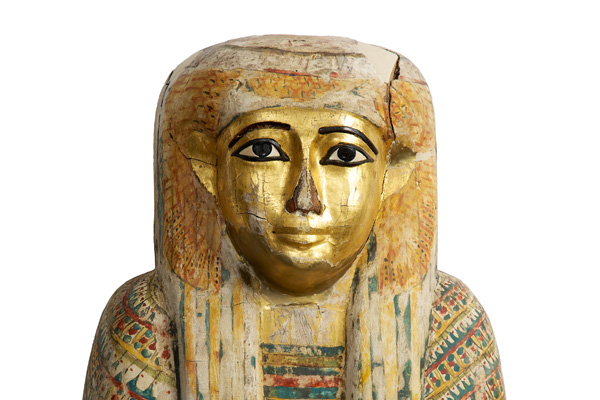 From Nefertiti to Amelia Edwards and Mrs Goodison, Egypt has been a place of strong women.

The unique exhibition; Adventures in Egypt: Mrs Goodison & Other Travellers tells the fascinating stories of some influential women in the early days of Egyptian archaeology and re-unites ancient masterpieces not seen together for over 120 years.

Celebrating 130 years since her first return from Egypt it combines objects from her own collection with masterpieces from international museums, including The British Museum and The National Portrait Gallery; all help provide a wider context for her life and travels.

On display are incredible unseen letters written by Mrs Goodison herself (from the Brooklyn Museum USA), that shed new light on important discoveries and acquisitions in The Atkinson’s own collections and present us with new characters that offer new voices to the stories of the past .

The Atkinson’s 1000-strong Egyptian collection mainly comes from the collection of Anne Goodison, wife of a Merseyside civil engineer and friend of John Ruskin, who learned hieroglyphs and visited Egypt twice in 1886-7 and 1890-1.

Adventures in Egypt is the first exhibition to be dedicated to the histories of travelling to Egypt and collecting Egyptian objects, focusing on the pioneering female travellers and collectors like Mrs Goodison, Amelia Edwards, founder of the Egypt Exploration Society and Annie Barlow, benefactor of Bolton Museum.

Nineteenth century excavators were allowed to keep a proportion of their finds, with the rest staying in Egypt. Excavators could distribute their finds among friends, colleagues, and funders to raise money, therefore separating objects among different collections. Here, pieces that have been separated in different collections since their discovery have been brought back together.

Star pieces include two heads from the excavations at the Temple of Mut in Luxor, excavated by female archaeologists Margaret Benson and Janet Gourlay; and objects from Tell el-Amarna, the capital of Tutankhamun’s parents Akhenaten and Nefertiti, excavated by Flinders Petrie and the young Howard Carter.

The Atkinson’s most recent acquisition; the Trial piece of Nefertiti, was originally excavated by Howard Carter for Lord Amherst and subsequently sold to The Metropolitan Museum of Art in New York, before being deaccessioned in the 1950s. It now joins other images of Nefertiti from the same excavations all on display together.

The purchase of this important piece was only possible because of the generous support from The Atkinson Development Trust, the Art Fund, and the ACE/V&A Purchase Grant Fund.

This remarkable exhibition presents an opportunity to celebrate the huge successes of The Atkinson’s strong Learning & Engagement offer; that has seen Sefton schools have Egyptologists and poets in residence as well as giving pupils the chance to develop their own digital resources to teach local heritage which has instilled a real sense of local pride in their hometown.

A special event is being held on Thursday 12 October, 6pm-8pm where school children from Christ Church Primary School who worked with The Atkinson will attend the event and will be reading out some of their fantastic work that came out of the project; Writing through Time.

Writing Through Time was funded by The Atkinson Development Trust and it aims to develop children’s writing skills and levels of literacy across the curriculum at Key Stage 2; it is hoped to share the project outcomes with all Bootle’s primary schools.