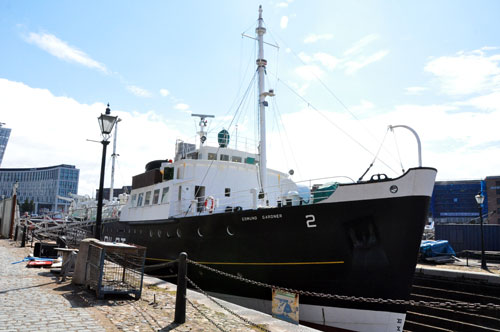 An interesting piece of local maritime history. Well worth a look but you need to book in advance and I’m sure places will soon fill up.

The pilot cutter Edmund Gardner – one of the world’s 50 most important preserved ships – re-opens to the public for the first time since 2006.

The iconic ship, part of the Merseyside Maritime Museum’s historic vessels collection, is located in one of the Canning graving docks. Free guided tours are held every Thursday and Saturday between 4 August and 1 October 2011.

Edmund Gardner has been closed to the public for five years during building work linked to the new Museum of Liverpool which opened on 19 July 2011.

Volunteer guides take members of the public around the ship that was home to River Mersey pilots between 1953 and 1981.

Three tours take place on Thursdays and Saturdays at 1100, 1230 and 1430 and last about  one hour. There is a limit of 10 places per tour – places must be booked in advance on 0151 478 4788.  Some restrictions apply as the boat is not fully accessible – there is no wheelchair or pushchair access. There are steep stairways and raised thresholds aboard.

However, visitors who cannot visit the ship can watch a video tour on the adjacent quayside. There is also a tour on the National Museums Liverpool’s web site http://www.liverpoolmuseums.org.uk/maritime/collections/edmundgardner/onlinetour.aspx

Rachel Mulhearn, director of Merseyside Maritime Museum, says: “The Edmund Gardner was an important part of the Mersey scene for decades and it is a great pleasure to be able to open her again to visitors.”

The Edmund Gardner was stationed at the Mersey Bar or off Anglesey. Pilots would stay on board awaiting the arrival of ships which they would board to guide in and out of the Port of Liverpool.

She was taken out of service and acquired by Merseyside Maritime Museum following the introduction of high-speed pilot launches.

The 768-ton Edmund Gardner was built in 1953 in Devon, one of three sisters named after chairman of the Mersey Docks & Harbour Board – the other was the Sir Thomas Brocklebank. Each could accommodate 32 pilots and along with a regular crew which included 11 apprentice pilots

The Edmund Gardner’s historic importance has been recognised by the National Historic Ships Committee which included the vessel in its National Core Collection of Historic Ships. She received the World Ship Trust’s award as an outstanding example of ship preservation.