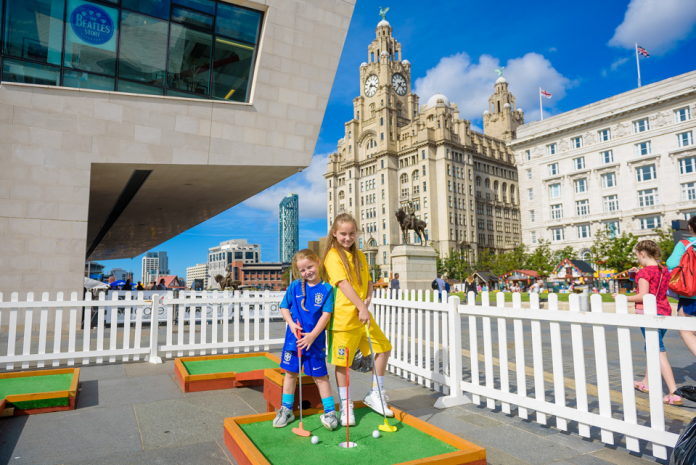 May 31, Liverpool: Pier Head Village announces its programme of entertainment in the run up to the official opening on June 30. The festival takes over Liverpool’s iconic waterfront next month with an action-packed, summer-long programme combining a wide range of enticing offers from thrills to music and art to culture with all things in between, and all on the most iconic waterfront in Europe.  The Pier Head Village is Liverpool’s newest and most ambitious leisure attraction and will be a place to make new memories with family and friends, with a complete day to night offer of activities, events and entertainment for all ages.

New for 2017, a partnership with Liverpool Sound City brings a new sound of live, acoustic music to the south side of the village with the first ever Sound City Bar & Garden. To the north of the village, enjoy the best laid-back beats with the Balearic Sunset Sessions’ (dates below) legendary DJs at the Village Beach Club, which takes place alternative weekends.  Curated by Impeccable’s

Derek Hazell and hosted by Andy Carroll, every other weekend resident DJs include Paul Bleasdale, Dreamgirl and Kevin Knox, Trevor Fung, and Richard Norris of The Grid/Beyond the Wizard’s Sleeve, with more special guests to be announced. For the first time ever the Pier Head will resonate to the most evocative Mediterranean sounds delivered by true DJ royalty creating a vibe from noon until 11pm on Saturday and Sunday. Filling the alternative weekend is Liverpool legend DJ Charlie Cee and his special guests. Charlie will take his audience on a 50-year journey of classic soul, RnB, reggae, hip-hop and more.

Alongside the Sound City Bar is The Artisan Village offering a spot of retail therapy with over 30 independent market-stalls featuring locally-sourced farm produce and souvenirs from independent artisans including Tilly’s Home Made Fudge, and Driftwood.  The Artisan Village will compliment The Village Food Court with The Great British Cheese Company, Crosby Coffee and the award-winning Bold Street Sweets and Gifts serving up affordable street food and treats seven days a week.  Finishing off the South Side offer is The Liverpool Art Fair, sited in a bespoke work of art built from 5 containers at the Mann Island entrance and featuring 75m of gallery space with local, affordable but brilliant art curated by Lucy Byrne and her team from more than 1000 submissions.

“Bringing people together, entertaining them and giving them a reason to spend many happy hours on the Pier Head enjoying the summer is our goal for this year. With the partnership with Liverpool Sound City and wonderful stakeholders such as Liverpool Art Fair, Sunset Sessions, Liverpool City Council, The Cavern Club, Field Vision and all of the artisan traders, we have created an attraction that is fitting for our wonderful city, at arguably the most exciting time in its history. It has never been more popular or been given more respect than right now. The Pier Head Village will reflect everything we love about our city.

“Quality has been our main priority for this year and as Liverpool is a UNESCO City of Music we have to create something truly special. The support we have received from the waterfront neighbours such as Brazilica, The Beatles Story, British Music Experience, The Cavern, Albert Dock Liverpool and others has been wonderful. The Pier Head Village will ensure the waterfront is alive and vibrant seven days a week, throughout the summer, proving Liverpool is a not just one of the top five UK tourist destinations but now a major destination for global tourism.”

Liverpool Art Fair is bringing a unique gallery space on the waterfront showcasing high quality affordable art from the region’s top artists. Over 300 local artists submitted their best artwork to a panel of judges (including former Island Records’ president and village partner, Marc Marot), who have selected Liverpool’s finest to showcase and sell their work. Joining Pier Head Village’s line-up for its sixth year in the city, Liverpool Art Fair will offer a fantastic opportunity for both art buyers and artists.

Pier Head Village is focused on activity-based fun for all of the family; you will find a free drop-in Village Health Hub, delivering a wide range of free fitness classes.  Saturday morning you can take a free dance class with Miguel Doforo and MD productions, learn to shake it in the sunshine like Beyonce or for more of a punch, get fit with a mini-boxercise class with former British karate and EBU world boxing champion and “personal trainer to the stars”, Tony Moran. Yoga, reiki, pilates and tai chi are also on the menu. Supporting the Heath Hub is Bold Street’s legendary Mattas International; they will be serving up hearty recipes and power smoothies to refuel after the workout.

The north side of the village features 3 of the world’s tallest and most thrilling rides, a bigger Sky Flier than 2016’s smash hit alongside The 60m Booster and the 60m Tower are guaranteed to set pulses racing, while Village Bounce is designed to bring a physical challenge to ensure that the younger family members are gaining health benefits while having fun in the sun, with an inflatable assault course putting the bounce in every child this summer.

“Following on from our epic 10th birthday celebration last weekend, Pier Head Village will be our biggest project to date. It has been great to work with the village team to bring this festival to life and the quality of entertainment that it will deliver will be outstanding. We will be bringing our experience of delivering festivals to the waterfront and with it some of the coolest emerging local talent around.”

Key dates for your diary:

July 2 – Morris Dancing Competition – Watch morris dancers from across the region battle it out on the Sound City Stage to compete to be champions of the North West.

July 14 – Supporting the arrival of the Magic Disney cruise ship. As the iconic cruise ship docks at Liverpool Cruise Terminal, we will be welcoming the guests with a fun-filled day of activities that the whole family can enjoy.

July 15 – Brazilica Festival. The world famous three-day Brazilica Festival returns to Liverpool city centre in 2017 for the tenth consecutive year, from July 14-16, and Liverpool’s International Samba Festival is proud to reveal that the Pier Head will be its new home for 2017!

There will certainly be a carnival atmosphere at the Pier Head site which will be brought to life with a colourful celebration of the sights, sounds and tastes of Brazilian culture on the Brazilica main stage which will take pride of place within the Pier Head Village.

August 6, 13, 27 & 28 – Simon O’Rouke – Creating the Beatles. On four magical days in August 2017, the Pier Head Village will host the internationally celebrated and award-winning wood sculptor Simon O’Rourke as he takes his audience on four unique visual and musical journeys celebrating the greatest band of all time. Over a period of approximately six hours per day on four separate days – culminating in the Bank Holiday weekend (Sunday and Monday, August 26 and 27) – and using only his chainsaw – Simon will transform huge tree trunks into statues of the fab four, inspired by the iconic Pier Head Beatles statues in a specially designed performance space in the shadow of the originals. Accompanied by a journey through the entire Beatles discography and some special live performances, the show forms the finale of The Pier Head Village’s “Beatle Weekender”.

Once complete, the four will be revealed as the full band, before one of the History Channel’s most respected auctioneers conducts an international auction of all four band members with all proceeds going to local children’s charities. Free to enter and completely unmissable.

September 8-10 – The Artisan Takeover. The closing weekend on September there will be an Artisan Festival takeover to showcase Liverpool’s finest makers and creatives along with a closing party to remember.

With more attractions still to be announced, Pier Head Village will be action-packed with thrill rides, live music, artisan stalls, art, good food and much more! For full event details and more information go to www.pierheadvillageliverpool.com Follow updates on Twitter, Instagram at @Pierheadvillage