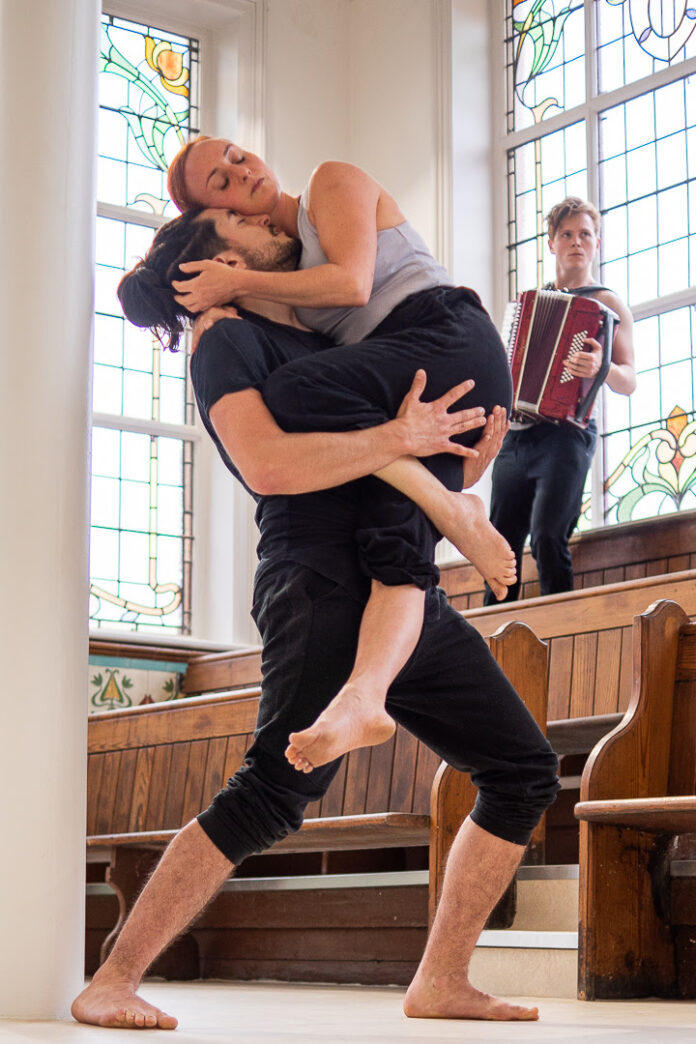 Acrobatic dance shows outside the Met Cathedral, award-winning clowns in Toxteth, and the first event to be held at a beautifully regenerated Sefton venue, are all a part of the UK’s only international physical theatre festival, kicking off next week.

Physical Fest returns to the Liverpool City Region this summer for an 8-day extravaganza of live & online performance, conversation & workshops, brought to you by the city’s own Tmesis Theatre.

Highlights include award winning clown, Lucy Hopkins with her hilarious, Ceremony of Golden Truth, along with incredible circus/dance artists Joli Vyann who will perform a beautiful – and free – acrobatic piece outside Liverpool’s Metropolitan Cathedral.

Built in 1909, the stunning Art Nouveau hall has been recently restored thanks to Heritage Lottery funding. Memoria – a poetic, visceral exploration of memory and nostalgia – will be the first event to take place in the new space since the restoration.

Other venues and locations for the 8-day long festival include the Unity Theatre and Toxteth TV.

The female-led, award-winning Liverpool company, Tmesis Theatre have continued their support of northern female artists by offering bursaries & mentoring to create new work for the festival.

Artistic Director, Elinor Randle said “I am really pleased, after such a difficult year for artists to be able to bring Physical Fest back, offer opportunities to artists and bring a fantastic mix of exciting performance in different spaces to the city region as well as online.”

Alongside the live programme, the festival will host a range of online events and workshops, including an insight into the creative process of Belgium’s premier dance theatre company Peeping Tom, along with Tree’s – an audio journey from International Art Clown, Jamie Wood who walked for 10 days between Coventry and Treherbert in South Wales, retracing the movement of his ancestors.

Tickets and information for all the performances at this year’s Physical Fest can be found at https://www.tmesistheatre.com/physical-fest/performances.

The festival, which runs from 25th June until the 2nd July, is supported by Arts Council England, Liverpool City Council and the Granada Foundation.

Physical Fest 2021 is dedicated to the memory of much-loved local photographer, Mark Loudon.

Applications are now invited for the Lever Prize 2010

An illuminating start to the Year of the Rooster