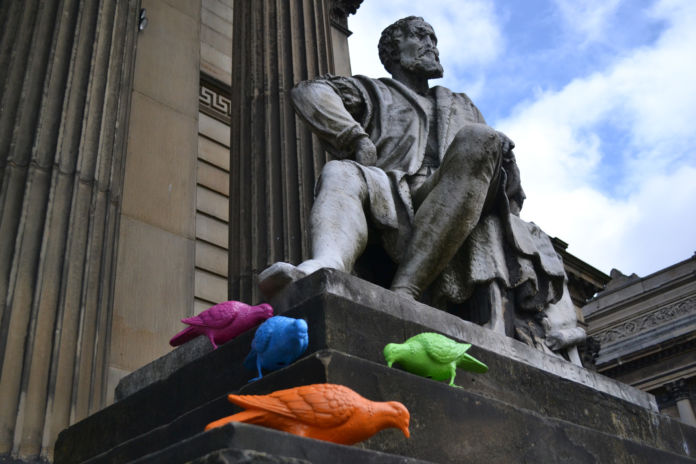 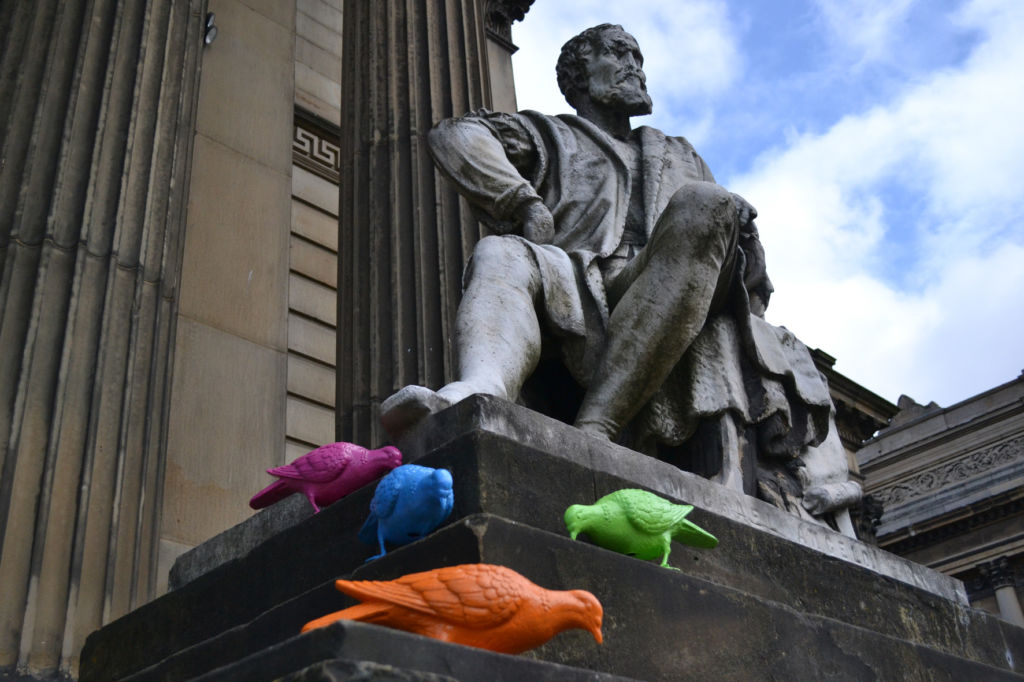 The humble pigeon is the subject of a brilliant new installation at the Walker Art Gallery for the
Liverpool Biennial by South Yorkshire-based artist Patrick Murphy.

Banished from city centres, branded a nuisance and especially unwelcome on historic
architecture, the common pigeon is much-maligned. However the pigeons of Belonging are
made welcome guests, even on the grand Victorian exterior of the Walker Art Gallery.

From 15 September 2012 around 190 life-size model pigeons in seven vibrant chromatic
colours will ‘roost’ on the roof, portico and other nooks of the gallery. From a distance the
gallery will be gleaming with the vivid colours and demand closer inspection. The unexpected
presence of these bright, exciting birds; their scale and quantity, make the whole situation at
once familiar but also both surreal and unusual.

The installation evokes questions about ownership and feelings of being accepted or
marginalised. Anthropomorphised, the pigeons can be seen to represent any group that
struggles to find a natural home or sense of inclusion in a physical or geographical space.

Ann Bukantas, Head of Fine Art said: “Belonging is playful and humorous, but it is also a
very thought-provoking piece that uses the birds to examine social order and society, and
communities that find themselves in a state of constant flight for a wide variety of reasons.

“Patrick has adopted The Unexpected Guest theme of the Liverpool Biennial and produced an
installation which will delight visitors with the colourful way in which it draws attention to the
gallery.

“The transformation of the ordinary pigeon to an insightful, beautiful artwork is surprisingly easy
to embrace with Patrick’s ‘makeover’, which challenges our ideas of identity and belonging.”

Patrick Murphy said: “Working with such a highly regarded institution as the Walker Art Gallery
and creating work for the Liverpool Biennial has been personally very rewarding and the
realisation of an idea long in planning.

finding acceptance or a natural sense of place, whether this be an intellectual or a physical/

Born in Ancona, Italy in 1966, Enrico is now based in Berlin. He was nominated for the Turner
Prize in 2009, but this will be the first solo presentation of his work in England outside London.

Madreperlage (2003) is an important piece which draws on many aspects of Enrico’s work.
In it an over-sized, embroidered rag doll leans against a sideboard with a fixed grin, his
hands resting in his lap. Around him is an Art Deco style painted glass panel and lamp, which
illuminates the scene.

The overall effect creates an impression of a hotel room, which is intentionally unsettling and
mysterious. Enrico says of the doll that it is “[the] part of [him] that could take a compliment.”

The Walker Art Gallery’s presentation of Madreperlage (2003) also includes five new drawings
and the piece Untitled: puppets we are the mods (2002).

An element of theatricality is a constant feature within Enrico’s work. Sometimes his figures are
anguished or menacing, sometimes kinky or homoerotic but they do appear to take on a ‘role’
and their surroundings suggest the set and props of a drama.

Described as a ‘contemporary surrealist’, there is a deadpan humour to much of Enrico’s
work which begins as drawings. Sometimes the drawing is the final outcome, sometimes they
develop into paintings, works on paper or large-scale installations referencing art history,
fashion, design and craft techniques.

The Walker Art Gallery is pleased to announce the five prize winners of the John Moores
Painting Prize 2012.

In alphabetical order: Biggs & Collings, Ian Law, Stephen Nicholas, Sarah Pickstone and
Narbi Price are in the running for the coveted title and the chance to follow in the footsteps of
previous winners such as David Hockney, Richard Hamilton, Mary Martin and Peter Doig.

The ultimate winner of the £25,000 first prize is announced by patron and winner of the
junior prize in 1961, Sir Peter Blake, on Friday 14 September, for the opening of the
Liverpool Biennial.

The four other prize winners will each receive £2,500.

Sandra Penketh, Director of Art Galleries said: “The judges have chosen five very different
paintings, which combine to challenge, delight and stimulate. They also represent an exhibition
which continues to reaffirm the power of paint to communicate with and move us.

“The judges of the John Moores Painting Prize assess each painting on its own merits. If
requested they are given the title, medium or the artist’s statement, but apart from this the
paintings are judged anonymously- they simply speak for themselves.

“It is this aspect of the John Moores Painting Prize which makes it so special. The work is
selected without the distraction of celebrity or notoriety, but instead on an ability to convey an
idea or emotion through paint.”

Half-term Activities at The Albert Dock

Tracey Emin on her passion for drawing