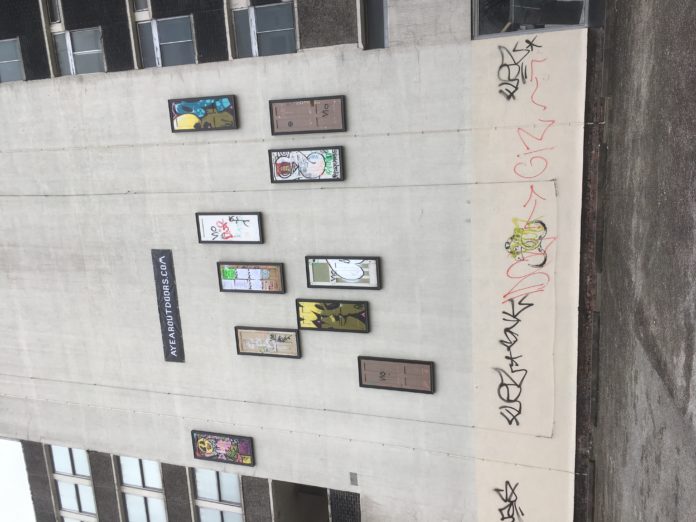 Early in 2017, ten reclaimed front doors were hung across the streets of Bristol. The doors were hung in plain sight on the city streets, ignored by passers-by. Street-art culture adopted some of the sites, integrating them into graffiti artworks, but others were completely neglected from the limelight.

Now, the doors have been removed, framed and are going on display in venues across the country. In Liverpool, the doors have been hung on the wall of Kingsway House, Hatton Gardens. Rather than being behind gallery doors, the installation will be free to all that visit the area.

The project was orchestrated by conceptual artist, Beau.

To Beau, a front door symbolises having a place to live – something which many people across the UK do not have access to.

And this was exactly the point of the project, which he aptly named ‘Outdoors’.

“I wanted to challenge our perceptions of beauty and worth. Outdoors shows how we interact with the world around us.” said Beau.

“Cuts to housing, mental health and social services are driving more and more people into critical homeless situations, which is more than rough sleeping. The hidden homeless community is often out of sight – sofa surfing, crashing with friends, staying in squats or communal homes, hostels and long-term B&B residences, all forms of homelessness often experienced for years,” said Beau.

“There are almost twice as many people without a home than there was this time five years ago. This is happening right around us, yet we walk on past. I hope Outdoors will act as a catalyst for conversation. Across the UK, we’re experiencing many of the same problems, in different cities. Hopefully things like Outdoors will help bridge the growing gap between us all.”

The doors have now been framed and are on display outside Kingsway House, Hatton Gardens. From there they will go on a tour of venues across the UK, culminating in an auction in December 2018.

100% of profits raised will be donated to charities supporting people in critical need in the UK.

Beau’s thought-provoking work has caught the attention of his peers in the art world.

Ralph Steadman, best known for his accompanying work to Hunter S. Thompson’s ‘Fear and Loathing in Las Vegas’, said, “I love the idea and am fascinated to see what transpires.”