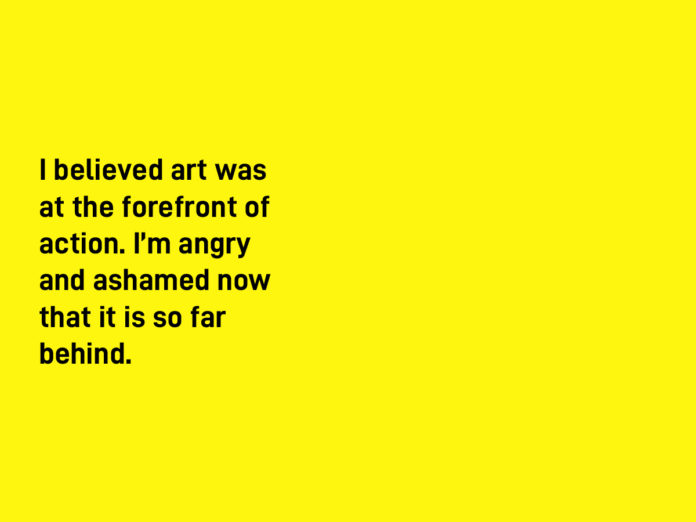 This article isn’t a formal statement on Black Lives Matter, it’s a response to the guilt we, myself included, have been confronted with in recent weeks, and an assessment of the most fundamental things that need to change. That includes us, and every organisation within the arts sector, without exception.

The challenge in writing this is to steer clear of repeating the statements of others, and to avoid self-justification. The issue with that is that Art in Liverpool’s only accountable member of staff is me. I employ three freelance staff currently who work on projects with restricted funding.

I need to be careful what I say about that funding as their roles are reliant on it and those funders are likely to read this, but, the way we are funded is gestural and offered using the language of sustainability.

Sustainability is a word which used right will lead to an open, diverse, fair work force in the arts. Used badly it will do what it has always done: protect management roles.

I am part of that problem. I know that. I’m a white, able bodied, heterosexual man. I receive funding from sources whose language is aimed at protecting organisations and the sector where it should protect artists and audiences.

The most eye opening thing I have read this week is a series of percentages published in an Arts Council funded study in 2011. It presents verbally as positive action. In reality it condemns the art world.

At the last UK population census (2011) 3.4% of the population was Black. In the same year, 1% of the work force in galleries and museums was Black. Audiences were roughly 3.4% Black too.

There was no data about how many artists were Black but judging from recent university offer figures across the UK around 7% were Black (this is in all disciplines, and we know that there are less Black acceptances on arts courses than average, but national statistics for Black, rather than BAME, intake are near impossible to find)

These figures made me angry. Because four years ago, I sat at my first board level network meeting and listened to a room of white people plan to make a plan to tackle diversity. The excuse that was made and still is, is that more needs to be done in education to ensure Black artists are coming through.

Yes arts education needs to do more. But we need to wake up as a sector and understand why we fail to work meaningfully with Black artists. And why, critically, when Black artists are graduating, when they are fulfilling the Person Specifications, they are still 30% less likely to get a job than the white person who sat through the same interview.

As an organisation we need to, and will, work actively towards more stable employment for all our staff and away from a project funded model. This will take time and effort as it will involve drastically changing our model and asking difficult questions of our funders, but whether our model is fair on an individual level or not is irrelevant. It is unfair on a societal and sectoral level where Black artists are just 1% of sector staff, and still more likely to be on fixed term contracts rather than in permanent roles.

I’m not just saying this about our institutions either, I’m saying this about independent organisations and groups. I’m saying it about our society as a whole. Art studios are disproportionately white. Collectives fail to expand their horizons. Independent galleries are not held to account and ready to judge others where they need to look back at themselves. This is perhaps irrelevant, but I’m angry at this today: children’s football clubs gathering on parks (within a pandemic, which is another issue entirely) fill parks with five pitches of children and their parents (that’s around 220 people) and none of them are Black, Asian or anything but white. In an area of visibly mixed population.

One of the reasons I went to art school was because I believed art was at the forefront of action. I’m angry and ashamed now that it is so far behind.

This is not a formal statement on Black Lives Matter, like those that have come out of most other arts organisations recently – some admirable, some less so. I’m not capable of writing that by myself. This is just me writing something which I hope articulates my feelings, and my anger at entering an art world I’m ashamed of. And some of my commitments to how I will keep trying to change that.

Later this year Art in Liverpool will set up its first steering group or board. That will include Black artists and will happen as soon as possible. That steering group will be invited to overrule my decisions, and to interject on the decisions and actions of our partners.

We will move away from a model of restricted fixed term funding as fast as we can, but leave the choice on contract type with each employee. This will be a slow process because I don’t know how to do it in a country where private giving in the arts sector is non-existent.

I will be more vocal about our failures and our successes, and clearer about our structures.