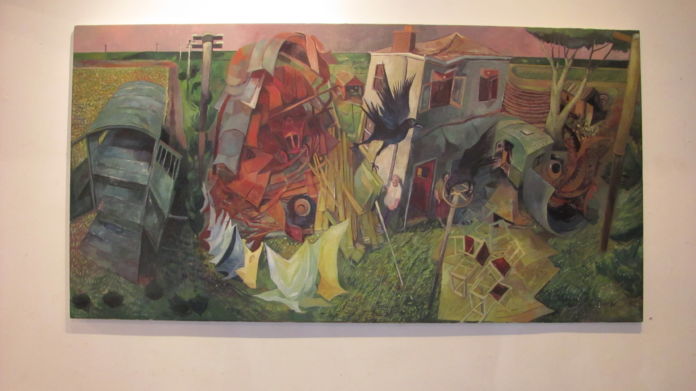 Art lovers are being given a rare chance to view the work of Merseyside artist Steve des Landes. 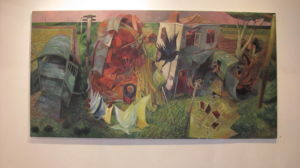 Fifty of his oil paintings are being shown in a new exhibition at Liverpool’s View Two Gallery in Mathew Street.
It’s the first time in almost three years the 50 year old professional painter has given his work a public outing. Normally his work is sold to art collectors ‘by word of mouth or personal recommendation’ from his home studio in Oxton, Wirral.He is also in discussions about showing his work in London and in galleries overseas.
Des Landes resumed oil painting on canvas three years ago after spending a decade on public artwork.His biggest commission during that spell was a £100,000 figurative relief for a Morrison’s Supermarket at Whitefield, Bury, and spending three months living in a crofter’s cottage on a remote Shetland Island while completing a work at a school there.
Des Landes describes his style as traditional British 20th century paintings. He is an admirer of the work of British greats such as Samuel Palmer, Graham Sutherland, Stanley Spencer and Paul Nash. His works span visual life and landscapes, and one of his favourite works is of Plex Moss, the lowland farming area close to his boyhood home in Southport.
His love of painting manifested itself as a young boy.
“At the age of 11 I was always trying to skive off games and avoiding maths lessons so I could paint,” said des Landes. Mr Smart, headmaster at his senior school in Southport became his inspiration and ‘encourager’. “He allowed me access to the school’s art room from 3-30pm until 5pm so I could practice my painting,” he said. That paved the way to a place at the Southport Art College followed by a BA degree course at Lancaster.
After graduation he spent a year in Australia and returned to the UK, working as a professional artist since then. “I feel so lucky to have earned my living all of my working life as an artist, doing something I just love doing.” View Two owner architect Ken Martin said: “Steve held his first exhibition here three years ago and we are delighted to see him return. His work is tremendous and the exhibition is one of the best we have ever presented.
“It will be some time before such a large collection of des Landes works are shown in one place so we are expecting great interest in this month long event.”
Art writer David Bingham says des Landes’ work is now beginning to come into its strongest fruition yet.”Given the progress in the last few years, it is exciting to consider how much more there will to come,” says Bingham.