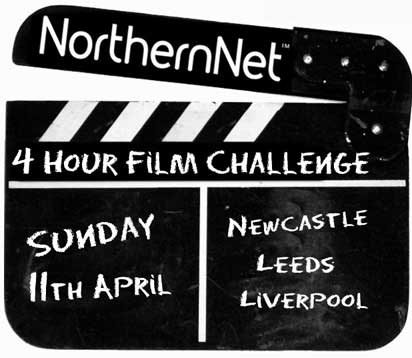 Avatar may well be fastest film to gross £1billion but the 4 Hour Film Challenge, set to take place in Newcastle, Liverpool and Leeds on SUNDAY April 11 2010, has designs on becoming one of the fastest Northern films made… full stop.

To celebrate NorthernNet’s superfast 1GBs network, the event will put the capabilities of local film makers to the test, as they are challenged to produce 15, four minute films, in three cities simultaneously in just four hours.

At midday on Sunday April 11, five teams in each city, based at FACT Picturehouse in Liverpool, the Tyneside Cinema in Newcastle and the Round Foundry Media Centre in Leeds, will be given a working title and two professional actors with which to collaborate. As part of the digital shootout, film makers will have just four hours to shoot, edit and deliver their four minute film. Using industry standard editing kit housed in city centre Media Access Bureaus (MABs), the filmmakers will showcase exactly what can be delivered at high speed.

The film makers will be able to transmit large video files fast, enabling budding directors and cameramen in three different cities to collaborate as if they were in the next room. At 4pm, when time’s up, the films will be transmitted via the MABs to the other cities and all 15 films will be screened at 5.30pm to a live audience.  Judges in each city will deliberate over the MABs hi-tech video conferencing equipment before awarding the winner of the NorthernNet 4 Hour Film Challenge Trophy.

A behind the scenes documentary will be filmed by an additional crew in each city who will use the MABs to edit footage, record a soundtrack and add titles in a different location – working collaboratively to  transfer the footage between them, before screening the documentary that night.

To view the final films, find out more about NorthernNet or book a session at a MAB, log on to www.northernnet.co.uk

Jewellery on sale in FACT bookshop – until Sep 15