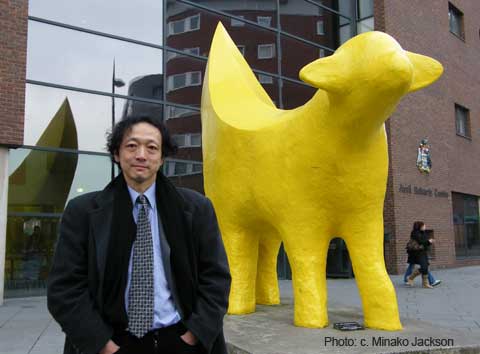 Taro Chiezo, the Japanese artist who designed the Superlambanana 10 years ago is in town today as agreement has finally been reached over the sculpture’s long term future (well, 80 years anyway).

Details of how the new version will be made and where it will be sighted are still to be sorted out but good to know that Taro will be back soon to start work on the project. I hope he finds a good home for the old one too.

After six months of negotiations Liverpool City Council is to create a replica of the 17-foot original which will be licenced to be on public display for the next 80 years.

As part of the landmark deal the current version of the original sculpture, which arrived in the city in 1998 but was limited to a 10-year display licence, will be handed back to its creator Japanese artist Taro Chiezo.

Taro will then oversee the construction of a brand new sculpture, manufactured from hardier materials, which is expected to go on show within the next six months at a location still to be decided.

Panel of Industry Experts revealed for Liverpool Film Night 2016 at...