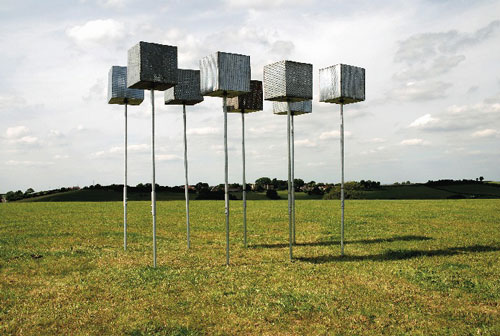 Liverpool artist, Jayne Lawless has created a sculptural installation from SitexOrbis’s perma screens to highlight the issue of empty houses and declining communities.

Jayne Lawless, who is studying for a Masters in Fine Art at Bath Spa University, was inspired to create the work after seeing many of the houses in the street of her parents’ home in Liverpool, boarded with SitexOrbis perma screen.

“Surrounded by this metal I was sad about the situation of moving people out of homes that were structurally sound and running the area down so much that people were made to feel they had no choice but to leave.”

Lawless developed an idea to weld eight scaffold poles to eight 60cm sq steel perma screen boxes on top. “The box represents a home with the pole literally piercing through the heart and pushing them up far from the land, leaving them in a precarious position,” explains Lawless.

The work is titled L5 6QW – the postcode of her house in Granton Road, Anfield. SitexOrbis supplied Lawless with the perma screen to make the sculpture.

The work has been installed on private land in Somerset with viewings scheduled from 27 September to 2 October. Lawless then hopes to move the installation around the country. “I like the idea of the work being placed in a rural setting so it feels isolated, out on its own and also to create a strong contrast of an urban issue/material being placed somewhere alien.”

About Jayne Lawless
Born in 1974, Jayne Lawless is an installation and sculpture artist from Liverpool. Despite being her passion, it wasn’t until after a variety of different working roles (including a trainee car mechanic, a waitress at a New York restaurant, and an aide to asylum seeking refugees, that Jayne began her career in art.

Following a Foundation Art course at The Arts Institute of Bournemouth, she graduated in 2004 from University Campus Suffolk in Ipswich with a BA (Hons) degree in Fine Art. In 2009 she gained a Post Graduate Diploma in Fine Art from Stass Paraskos’ acclaimed Cyprus College of Art in Lemba, near Paphos, Cyprus. Jayne has widely exhibited work in London, Liverpool, Suffolk, Poland and Cyprus, and was a shortlisted finalist of the inaugural Liverpool Art Prize in 2008, Liverpool’s Capital of Culture year, for her work Tunnel (2007).

In 2010 she embarked on a Masters degree study at Bath Spa University which she is set to complete in autumn 2011.