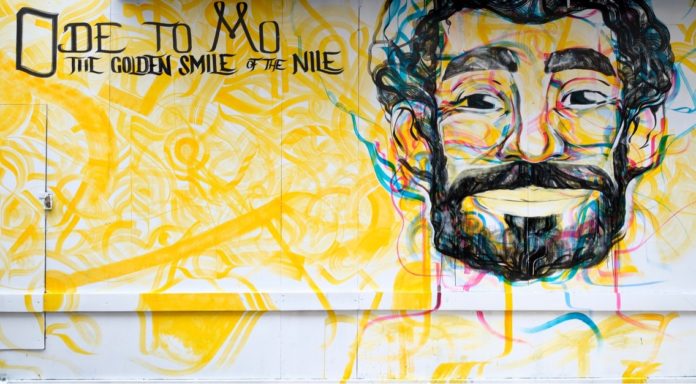 To coincide with the Champions League Final between Liverpool FC and Real Madrid on Saturday 26 May the Rapid Response Unit has commissioned poet Musa Okwonga and artist Guy McKinley to create new work about Egyptian International and Liverpool striker Mo Salah.

He was initially taken to heart by fans of Liverpool FC because of his astonishing tally of goals. The chants of “If he scores another few I’ll be muslim too” and “He’s sitting in the mosque that’s where I want to be” went viral on social media channels globally.

But beyond the football pitch Mo Salah has come to represent a positive, friendly, polite, approachable alternative image of muslim masculinity at a time when young bearded muslim men have become subject to much suspicion and hostility.

British Ugandan poet and author Musa Okwonga has previously published books on football and wrote a poem for the FA to celebrate their 150th anniversary.

His ‘Ode To Mo’ celebrates all that Salah has come to represent as he is about to play in the biggest game in European Club football in front of a global audience of billions having just received the coveted Golden Boot Award.

The Rapid Response Unit has created a minute long film with Liverpudlians of varying ages and professions each delivering a line of the poem across city centre locations to be released on Saturday morning. The film will be played at screenings of the live match at several venues in Liverpool and on the large screen outside Lime Street station.

Liverpool born street artist and LFC fan Guy McKinley has also been commissioned to create a new 6 metre by 3 metre street painting of Mo alongside lines from the poem on a busy city centre shopping street.

Walker Artwork of the Month – April 2007