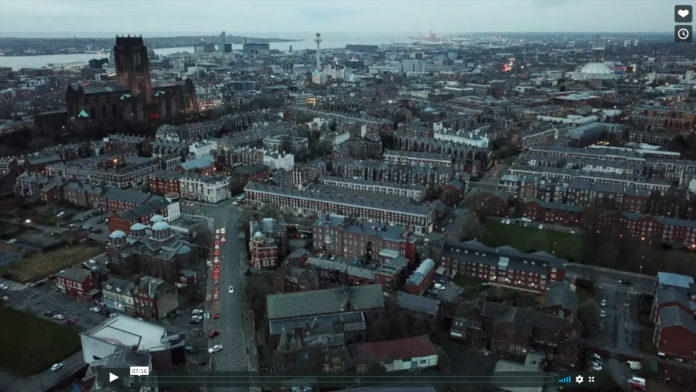 Kiara Mohamed is a Queer, multidisciplinary artist and one of Liverpool’s most outstanding filmmakers. In this new short she reflects on the concept of home and what it means to different people, acknowledging that “not everyone has a home they deserve”, or even a home at all. The film touches on social issues including homelessness and the minimum wage workers who now find themselves on the front line of the fight against the virus.

Home culminates by encouraging us to take the lessons learned from the pandemic forward, and to continue, in these uncertain times, to reach out to those whose house is not a home beyond the immediate crisis.

Mohamed’s carefully directed drone eye view is exhilarating and mesmerising and we travel with her as the camera soars above houses, city landmarks, out to the Mersey river and then home.

Home was originally premiered as part of LightNight at Home on Friday 15 May by Bluecoat, and received a rapturous response on social media.  The premiere continues Bluecoat’s commitment to showing new work and supporting artists from the city and beyond.

Following Mohamed’s compelling Home (shared in May 2020), we are delighted also to premiere Suki Chan’s new short film Hallucinations in June 2020, filmed in a Dementia Care Home in the North West. These cultural firsts are part of Bluecoat’s on-line programme dedicated to sharing new work while the building remains closed.

Kiara Mohamed: “I created ‘Home’ to archive this moment in history and all my feelings during this pandemic. In the film you can hear the clock missing a tick every now and then, a symbolic disruption to life as we know it. As someone who was a homeless teenager and have lived in houses that were not a home to me, I wanted to let those surviving through domestic violence, honour based violence and homophobic and transphobic homes, that we remember them and it is our moral duty to reach out. We all have a social responsibility to those who are vulnerable and despite the disruption in our lives due to Covid, we all need to do what we can to help one another.”

Bluecoat’s Head of Programme, Marie-Anne McQuay: “Home is a deeply tender, poetic and timely film made under lock down conditions by Liverpool artist Kiara Mohamed. The artist and filmmaker questions notions of home – whether home is a safe place, whether we have the home we deserve, what it is to be bounded by our home – in a mesmerising short film. The reaction to her film has been so strong, with viewers from across the city, the UK and beyond responding to her themes and message, we want to make sure that Home receives the widest audience possible.”

Are we doing enough to prepare for 2008?

Brazilian Beatles and Other Covers