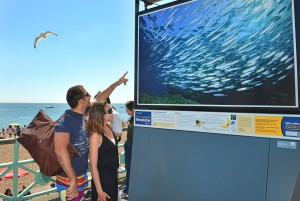 New Brighton is set to host a giant open air street gallery of photographs as part of a national tour to illustrate the history, scope and impact of co-operation world-wide.

From football clubs to farming, retail to renewables and pubs to performing arts, the free outdoor exhibition has been compiled by The Co-operative to celebrate the contribution of co-operatives to worldwide socio-economic development.

Illuminated at night, The Co-operative Revolution Street Gallery consists of 24 images on three metre high installations and will be a fixture outside the Floral Pavilion Theatre and Conference Centre on Marine Promenade between 16 July – 5 August.

Keela Walsh, The Co-operative’s Membership Officer for Merseyside said: “The striking images and narrative bring to life how co-operatives grew from humble beginnings in the mid 19th century into a global movement with an estimated one billion members worldwide today.

“The Street Gallery illustrates how everyday people are not only predisposed to co-operation, but are making it happen in communities the world over – changing their worlds for the better by making a difference to the society that they live in.”

The Co-operative Revolution Street Gallery was created to mark the United Nations International Year of Co-operatives, highlighting the significant contribution of co-operatives to poverty reduction, community cohesion, employment generation and social integration, and has been seen by an estimated 6 million people.