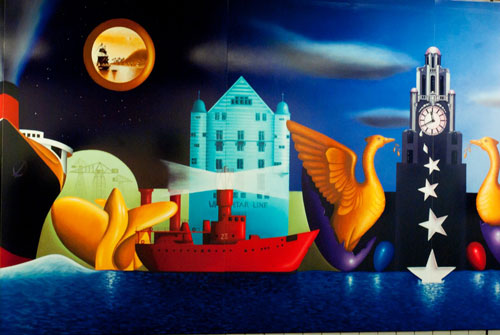 New artwork for Liverpool’s Moorfields Station
A striking new piece of art has been unveiled at Moorfields Station in Liverpool, the fourth in a Merseytravel project to ‘Animate the Underground’, sited across the network’s five underground stations.

The piece, by local artist Grant Searl, entitled ’The Birth of Liverpool’ is an oil on canvas painting,  reproduced onto aluminium plate, and depicts the rich maritime history which can be traced back to Liverpool’s birth as a vibrant port and city. It also celebrates the centenary of Liverpool’s own Liver Building and the iconic Liver Bird which famously keeps watch over the port, the city and her people.

Three of the five works have already been installed at the following locations: – ‘One Love One Life One Liverpool’ at Liverpool James Street Station,’ The Madness of King John’ at Liverpool Lime Street Underpass and ‘Garden of Icons’ at Hamilton Square Station.

Each painting has an individual theme and is accompanied by its very own riddle, which leads to a hidden word; when all five riddles have been solved they will form the basis of an answer to a very exciting ‘Art on the Network’ competition, with one lucky winner receiving a limited edition set comprising of all five paintings.

Full details of the competition will be released when the fifth and final piece is unveiled at Liverpool Central Station in August, to coincide with the Liverpool Mathew Street Festival. 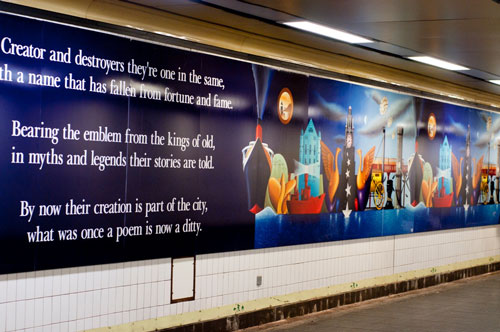 Take Part in the Liverpool ONE Piano Festival

Futuresonic 2008 – Details and Call for Submissions