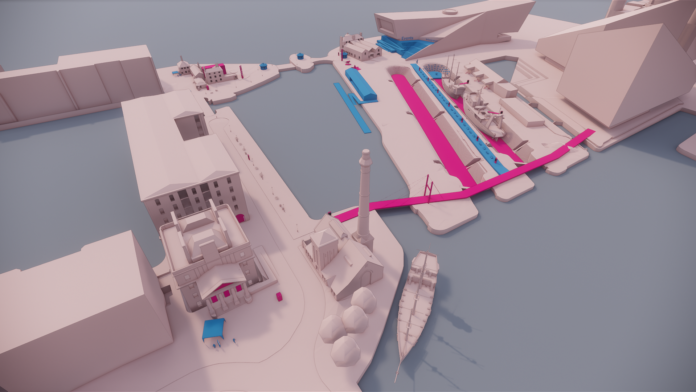 To mark the start of the new year, NML will embark on a landmark project to enhance a key part of the waterfront, launching with a high-profile placemaking competition in March 2021, to identify designers who will be part of the area’s development.

Spanning the area between the Royal Albert Dock and Mann Island, the transformation project will take in key landmarks including the creation of pedestrian links to the Canning Dock while also bringing life to multiple buildings within the area as part of a 10-year masterplan of transformation of Liverpool’s waterfront.

The highlight of the building transformations will be the redevelopment of the Dr Martin Luther King Jr Building – formerly the Dock Traffic Office – which stands as a major iconic focal point of the Royal Albert Dock and will provide a dramatic and prominent entrance to the city’s International Slavery Museum (ISM) as part of the plans.

Laura Pye, Director of National Museums Liverpool, said: “We’re thrilled to start the new year with news of our ambitions for our Waterfront Transformation Project. The public realm between the Royal Albert Dock and Mann Island represents a huge opportunity for development and this project will be a big step towards enabling the public and our communities to share, enjoy and engage with its incredibly rich heritage.

“With the launch of our placemaking competition in March we hope to reinvent our much-loved public spaces and create an exciting, welcoming, and engaging environment for the benefit of the museums, our visitors, colleagues and the many businesses in the area and wider city, whilst enabling the stories told at our three waterfront museums to also be visible beyond our buildings.”

The competition, managed by Colander Associates, will be supported by £120,000 of funding from the Liverpool City Region Combined Authority, as part of the Race Equality Programme launched by Metro Mayor Steve Rotheram last year. In December, it was announced that the International Slavery Museum would receive £55,000 to take forward the first stage of its pre-development funding – the first step of the Waterfront Transformation Project, which will see NML realise long-held ambitions for the museum.

Currently housed on the third floor of the Maritime Museum (MM), the plan to evolve the International Slavery Museum is central to the Waterfront Transformation Project, expanding the museum into the adjacent Dr Martin Luther King Jr Building; giving it a front door of its own that is immediately visible to every visitor entering the Royal Albert Dock from the Strand.

The transformation will also extend into the Maritime Museum, as gallery spaces and narratives around Liverpool’s maritime history will be developed and evolved to support and complement ISM, along with a new special exhibition space, community spaces and shared facilities that will create a seamless visitor experience between both museums.

Head of the International Slavery Museum, Dr Richard Benjamin said: “Liverpool became the epicentre of the transatlantic slave trade, hence the importance of the stories we tell and the work we do at the International Slavery Museum. This exciting and timely transformation project will allow the museum to grow, develop and be central to national and global discourses. These include racial inequality, other legacies of transatlantic slavery, being actively anti-racist, diverse, and inclusive.

“Utilising the iconic Dr Martin Luther King Jr Building is key to this as we can create new spaces that are community-focused, educational, welcoming, and thought-provoking. Social movements and the growing discussion of Britain’s role in the slave trade have changed the urgency for this discourse and involvement.”

Spaces will be created for education, exhibitions, discussion, and research. Significantly, it will speak with the voices of those most deeply affected by historic and contemporary slavery. A community-led model of working with Liverpool’s Black communities and victims of modern slavery will co-create the content and engagement programme around themes of historic slavery, human rights, social justice, racism, and discrimination. The expansion will create a much stronger, physical presence on the waterfront, symbolising the city’s commitment to addressing its ties to the transatlantic slave trade, and framing how visitors understand the history of the docks and the built environment surrounding them.

Laura Pye continues: “The slave trade was the backbone of the city’s prosperity, and it is long overdue to weave this history into the public realm. Our aim will be to create a vibrant, active, and public space that has long term flexibility of use and to utilise the surrounding redundant quaysides to complement existing developments and create a solid foundation for the future. We want to re-engage local communities and empower individuals to bring this significant and incredibly rich part of the waterfront back to life. It’s something for everyone to be involved in from the outset, so we look forward to appointing innovative designers who thrive on collaboration, to work closely with local people to make our plans a reality.”

In the 18th century, the now underutilised dry docks were once used for fitting out, cleaning and repairing ships, including those used in the transatlantic slave trade, central to Liverpool’s economy at the time. These dry docks are now some of the most historically significant maritime structures in the world. Breathing new life into the Canning Dock, as well as creating new pedestrian bridges to improve accessibility, the placemaking competition launching in March will seek to find a multi-disciplinary design team for the development of the new public spaces – bringing forward innovative and creative solutions that will raise the profile of the area whilst responding to the history of the site and creating one seamless experience linking past with present.

Additionally, there are also multiple smaller buildings that are not fully used – including the Cooperage, Mermaid House, Pilotage building, Piermaster’s House and Great Western Railway Building – representing commercial and cultural opportunities for NML as part of its sustainability planning, in order to generate more revenue streams to support its important work. NML is already working with architects MICA and local firm Harrison Stringfellow to progress a feasibility study into the potential to rejuvenate these buildings to create exciting, social and flexible spaces, and the organisation is actively seeking partners to work with on this area of the project.

As well as attracting tourists, driving urban regeneration, regional and social economic growth, the ambitious plans have been accelerated by the continuing presence of Covid-19. With many of us remaining close to home and exploring local hidden gems, the pandemic has demonstrated that locations should become better places to inhabit, as well as visit. National Museums Liverpool’s Waterfront Transformation Project will be inviting, inclusive and relevant, contributing to the placemaking and regeneration of the city with a development that people can be proud to have on their doorstep.

The project will also respond to the resurgence of the Black Lives Matter movement, where the powerful outcry for ending racism among a string of other injustices has been amplified. National Museums Liverpool will ensure that Black lives matter in all spaces, and this will play a pivotal role in the development, with local people helping shape its vision and programme, ensuring the waterfront is a place for everyone, representative of the cultures, communities, and creativity of Liverpool City Region and beyond.

The Art of Reggae exhibition returns to Liverpool this June