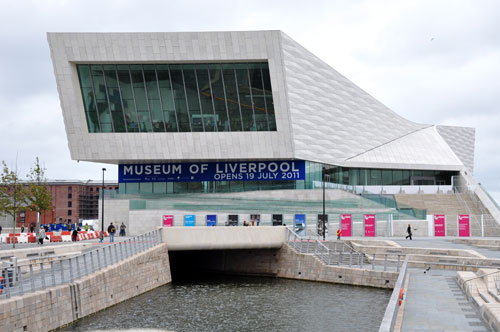 Museum welcomes 250,000 visitors
A quarter of a million at Museum of Liverpool in just four weeks

More than 250,000 people have visited the Museum of Liverpool since it opened four weeks ago, equivalent to the capacities of Anfield or Goodison Park 5 to 6 times over and more than half the population of the city as a whole.

Crowds have flocked to the new Museum with an average of 8,300 people a day through the doors. The Museum which is free entry opened on July 19 and tells the story of the city and its people.

Museum bosses had predicted 78,000 visitors in the first month of opening, but the response from the public has been three times that.

Janet Dugdale, Director of the Museum of Liverpool said: ”The visitor figures are staggering. We are thrilled with the success of the new Museum. To get a quarter of a million people through the doors in the first month is fantastic. There is a real buzz of excitement in the Museum and it’s so nice to see so many people enjoying themselves.”

Liverpool FC legend Jamie Carragher visited recently and was impressed with what he saw.

He said:  “Being born and bred in this city I was keen to visit the new Museum of Liverpool as soon as it opened. I really enjoyed the Wondrous Place gallery with all the sporting memorabilia. The film about Merseyside football is very special and really captures what it means to go to the match and be a Red or a Blue.

“I took the whole family and we all had a great time. I think the new museum will be massively popular not just with Merseysiders but also with tourists and visitors to the city too.”

The Museum will open in two phases, featuring four main galleries and a number of smaller gallery spaces. On 19 July, three of the four main galleries opened: Wondrous Place, The People’s Republic and Global City. Also open is Little Liverpool, a dedicated gallery for children aged six and under, the stunning Atrium space and Skylight Gallery. The second phase will open this winter.

The diverse range of exhibits on display in Phase One includes:

The Museum of Liverpool has been made possible with generous support from major funders, including the North West Development Agency (NWDA), The European Regional Development Fund (ERDF), the Heritage Lottery Fund (HLF) and the Department of Culture Media and Sport (DCMS).

MUSIC – FUSE at the Picket