Moth man at the pyramids

Through the history of human civilisation there has always been the hero born of Gods. Half human and half deity to imbue the ultimate in possible human existence. From the writings of Homer, Zeus and his many offspring, at times a show of gold in front of a mere mortal female only to find out she is impregnated. Similar, even in other religions and indeed Christianity, Mary, the mother of Jesus the Saviour, but the virgin. 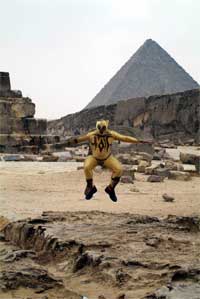 In the 21st Century, we have the liberties of erudition which provides the fundamentals of insight to make a discerning judgement, so these analogies of gods and semi-gods (half god and half human), may seem strange and naive, bordering on the ridiculous in terms of satirical rationale. However, we have to remember these where written in a different historical context and to convey something more. Through anecdotes, narratives and fables, these inscribed and orated to convey exemplar.

Tony Knox new live intervention at the pyramids, the inset fusion with human form to be omnipotent of inset and traditional between man to the character inspired by the insect the moth this homage to the ancients gods of Egypt, where Knox disrobed his casual ware to display the costume the location on the base of the pyramids the transformation to moth man was observed by bemused locals and tourists that where in a state of surprise to observe another wonder of the world.

Moth man places in context the human creature from ancient history to post modern society …. Where in reality the innate proclivities of the human creature have not changed, rather the parameters and their ability of intervention.
www.podgy.org.uk